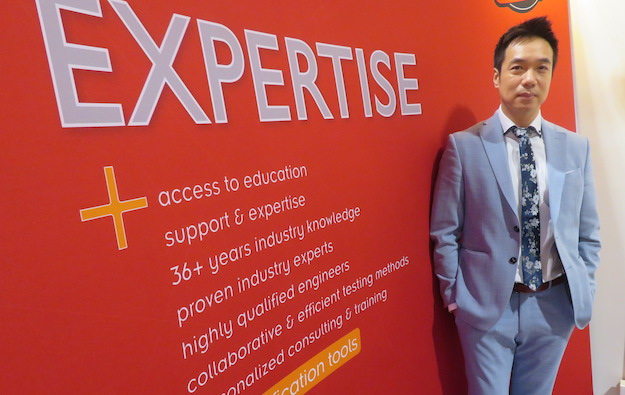 Gaming testing laboratory and technical consultancy BMM International LLC, known as BMM Testlabs, says business in Asia has grown by more than 20 percent so far in 2019 compared with the prior-year period.

BMM Testlabs, a private company based in the United States, expects the trend to extend into 2020. To cope with increased demand for its services, the firm is moving to a bigger office in Macau and hiring more staff, says Jeffrey Fong, vice president for business development for Asia.

The firm “has had excellent year-over-year growth in Asia” in 2019, mainly driven by an increase in customers, Mr Fong (pictured) told GGRAsia in an interview. He added that business turnover in Asia for the year was up by “20 percent-plus”.

BMM Testlabs currently has seven staff in its Macau office, and a similar number in its Singapore branch, plus two representatives in the Philippines, according to Mr Fong. “We want to expand it probably to 10 to 12 people in Macau.”

Mr Fong’s comments were made on the sidelines of MGS Entertainment Show 2019, a casino industry trade exhibition and conference that took place in Macau last week.

BMM Testlabs says it has provided technical and regulatory compliance services to the gaming industry since 1981. The firm reportedly serves more than 460 jurisdictions from 14 locations and has approximately 400 staff. The company’s headquarters are in Las Vegas, Nevada, and the group has offices in Macau and Singapore, and two Australian offices, respectively in Sydney, New South Wales, and in Melbourne, Victoria.

Mr Fong was appointed BMM Testlabs’ vice president for Asia in March. The firm stated at the time that his appointment was aimed at helping build on BMM Testlabs’ strength in Asian markets regarding either compliance testing or support for, respectively, online gaming, land-based gaming products, and casino services.

“We see demand for our services in both Macau and the Philippines is still growing,” Mr Fong said in the interview with GGRAsia. These remained BMM Testlabs’ “core markets” regarding land-based gaming in Asia, he added.

The company executive said BMM Testlabs enjoyed a sizeable market share regarding product testing for land-based gaming in Singapore. “But the Singapore market is not too big compared to the Philippines or Macau… It has more or less stabilised now,” he added.

“Even in less-regulated markets, companies want us to do testing for them, so they can provide more confidence to the players or to their business partners” by having their gaming equipment certified according to international standards, Mr Fong explained. “This surprised us too.”

The BMM Testlabs executive stated that the firm particularly was seeing increased demand for its testing and consultancy services from gaming equipment suppliers engaged in the Vietnam market. “We want to extend our foothold in Vietnam to have a better understanding of the regulations there and build a closer relationship with the local regulators, to make sure we can get the news first-hand if anything happens there.”

The initial casino in Vietnam allowed to welcome economically-eligible locals as gambling customers – the Corona Resort and Casino, on Phu Quoc island – opened to the public in January.

Another new property – Hoiana, a large scale casino resort being built in Hoi An in the central Vietnamese province of Quang Nam – will reportedly open its first phase in the first half of 2020.

BMM Testlabs said it was paying close attention to developments in Japan, as the country moves to authorise its first casino resorts. Mr Fong stated his firm already had visited Japan and met with consultants advising the Japanese authorities on the development of regulations for the gaming industry.

Japan’s central authorities have announced they will allow a maximum of three casino resorts in the first phase of market liberalisation, with the first property unlikely to open before 2025, according to several investment analysts.

“Japan can be a very big market, and everyone is looking at it,” Mr Fong said. It would “probably” take “another couple of years at least, to get something really happening,” he noted. “But once things are established over there, we have plans to expand to Japan.”

A Macau court was offered evidence on Monday, including of recordings from police-wiretapped telephone conversation, that the prosecution says proves the direct involvement of Levo Chan Weng Lin... END_OF_DOCUMENT_TOKEN_TO_BE_REPLACED