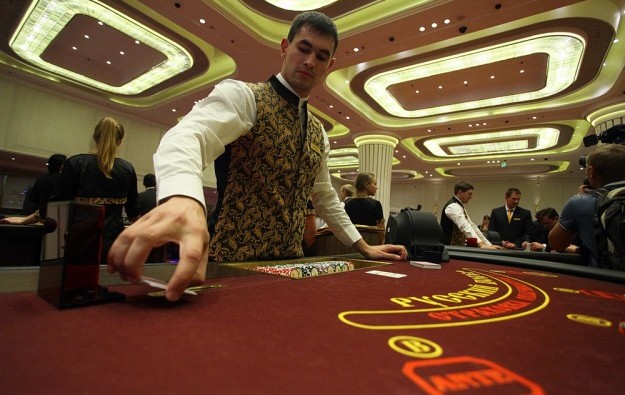 He added: “These growth rates are broadly in line with what we’ve seen in other jurisdictions as their VIP programmes have ramped. We note that our 2018 VIP forecast results in Tigre de Cristal being around 1.0 percent of Macau [‘s VIP market size] (from 0.6 percent in the second half of 2016).”

Tigre de Cristal (pictured) began working with two fixed-room junket operators in late June and has seen a significant uptick in VIP play as a result, according to the casino promoter’s interim report published in September. Mr Govertsen said that VIP monthly volumes at the property had almost tripled to HKD2 billion since July.

According to the Union Gaming analyst, Tigre de Cristal “is generally a VIP-focused casino, although its current underlying mass market business effectively covers almost all property operational expenses”. The brokerage forecast in its Monday note mass gaming table volumes at the property to grow between 8 percent and 9 percent in 2017, to RUB4.82 billion (US$77.5 million).

In Monday’s memo, Mr Govertsen forecast Summit Ascent to post “mid-teens EBITDA [earnings before interest, taxation, depreciation and amortisation] growth in 2017 and 2018”, with “outsized growth in 2020 on the heels of phase two” of Tigre de Cristal.

The brokerage noted that Summit Ascent generates “the entirety of its revenues and profits via its ownership stake in Oriental Regent in addition to a management fee earned from running the operations at Oriental Regent’s casino Tigre de Cristal”.

Tigre de Cristal had a soft launch in October 2015 followed by an official one in November the same year. The property is currently the only casino in operation in the Primorye Integrated Entertainment Zone, a casino development area located 50 kilometres (31 miles) from Russia’s Pacific port of Vladivostok.

Phase two of Tigre de Cristal – with a total area of 100,000 square metres (1.08 million sq feet) and with construction expected to start in the second half of 2017 – is to include additional hotel rooms, shops, conference facilities and restaurants. It is forecast to cost about US$500 million.

According to Union Gaming’s note, phase two “will represent an entirely new resort (rather than an expansion of the existing Tigre de Cristal)” and will feature 100 VIP gaming tables, 70 mass tables and 500 slot-machine and electronic gaming machine positions.

Four licences have so far been granted for the development of casino resorts in the Primorye Integrated Entertainment Zone, coupled with land grants totalling almost 1.4 million square metres. Hong Kong-listed casino operator NagaCorp Ltd is expected to be the second firm to open a venue in that area. NagaCorp’s chairman Tim McNally has told GGRAsia that the construction programme is on schedule and the group expects to open its property there in the summer of 2018.

The imminent return of package tours from mainland China will not only help boost Macau’s tourism businesses, but is also expected to help casinos gain more foot traffic in their mass gaming... END_OF_DOCUMENT_TOKEN_TO_BE_REPLACED