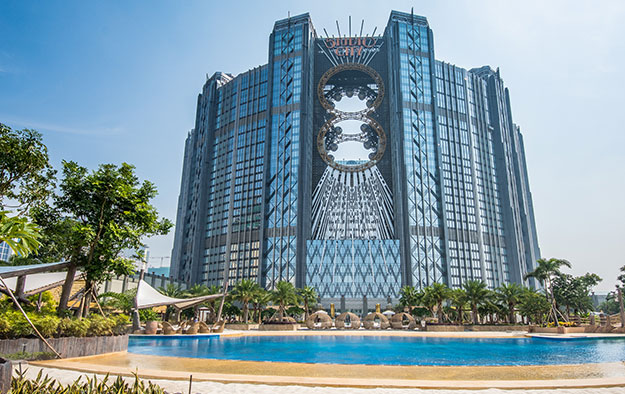 “However, there is no immediate impact on Studio City Finance’s B2 corporate family rating, B3 senior unsecured rating, as well as negative outlook,” the ratings house said in a statement on Monday.

Studio City Finance has developed and operates – via one of its units – the Studio City project, a new US$3.2-billion casino resort (pictured) in Macau that opened on October 27.

Moody’s on November 2 revised to “negative” from “stable” the outlook of Studio City Finance’s B2 corporate family rating and B3 senior unsecured rating.

Casino operator Melco Crown Entertainment Ltd – 60 percent owner of the Studio City project – on November 18 announced that one of its units had reached an agreement to amend the documentation related to a US$1.4 billion project loan for the resort.

“The amendment to lower the required number of gaming tables is credit positive because it has alleviated the risk of covenant breach and immediate repayment of the US$1.4 billion credit facilities,” Kaven Tsang, a Moody’s vice president and senior credit officer, said in Monday’s statement.

“The amendments to the financial covenants and the rescheduling of the testing dates will also reduce the risk of non-compliance in the near-term, as the initial operation of the Studio City project will likely stay weak, given the challenging operating environment in Macau’s gaming sector,” added Mr Tsang.

Moody’s said however that Studio City Finance’s ratings outlook remains negative, “reflecting an expectation of weak cash flow generation for its Studio City project in the next 12-18 months, which will continue to pressure its liquidity and delay its deleveraging”.

Macau’s casino gross gaming revenue (GGR) for the first five days of February is estimated at MOP1.9 billion (US$235.1 million) – or MOP380 million per day – a level that suggests a “45... END_OF_DOCUMENT_TOKEN_TO_BE_REPLACED