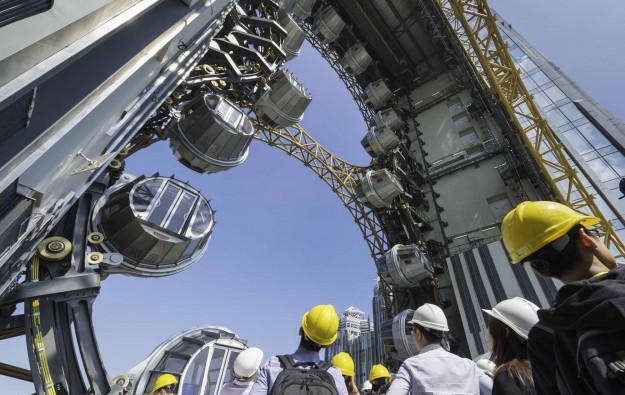 Monday’s media tour of Macau’s latest casino resort – the US$3.2-billion Studio City – ahead of its official opening today (October 27), was heavy in the focus on its general entertainment and light on its mention of casino gaming.

It was not until around 9pm that evening, following a dinner for the media, that journalists were scheduled to get a preview of the gaming floor. It was a space significantly altered from an initial preview on August 5, when the Macau government had not yet announced an allocation of 250 new-to-market gaming tables for the property. A total of 200 new tables are available to the property from today, with a further 50 allowed with effect from January.

A further announcement, made last week by Macau’s Secretary for Economy and Finance, Lionel Leong Vai Tac, that Studio City – 60 percent owned by Melco Crown Entertainment Ltd – was to have no VIP gaming rooms – was not a complete surprise to several investment analysts spoken to by GGRAsia.

One told us: “I had heard some talk of it before the government announcement.”

Asked about the reasons behind such a move, the person said: “A Macau operator’s margins are likely to be below 20 percent on direct VIP [casino-managed rather than junket managed VIP gaming] compared to 25 percent to 40 percent on premium mass. Because of that, Melco Crown might prefer to keep Macau VIP business at its 100-percent owned properties City of Dreams Macau and Altira Macau, rather than have it at Studio City. What’s not clear is whether having no VIP business at Studio City was a business decision or a condition from the Macau government in return for new tables,” added the analyst, who asked not to be identified.

Studio City’s non-gaming attractions – shown off to the world’s media on Monday – include a 27,871-square-metre (300,000-sq-foot) shopping mall; and the 130-metre-high (427-foot-high) Golden Reel, a figure of eight-shaped Ferris wheel said to be Asia’s highest (pictured).

Studio City also has 4,000 square metres of indoor event space with a ballroom capable of seating up to 650 guests per function; a ‘Warner Bros. Fun Zone’ aimed at children and young families; and a virtual reality ride called ‘Batman Dark Flight’, based on the DC Comics character and Hollywood film franchise.

The Macau authorities – supported by China’s central government – are seeking to diversify the city’s tourism market beyond hardcore gambling.

The property additionally has a 300-seat theatre, designed by American magician Franz Harary, as centrepiece of the resort’s ‘The House of Magic’ shows.

The artist gave those on Monday’s media tour a taste of his act. In a short question and answer session with journalists after his performance, he said Macau – and Cotai in particular – had overtaken Las Vegas for entertainment innovation.

“This is where it’s all happening. The stuff I’m doing here I could never do in Las Vegas,” stated the magician. “The market wouldn’t bear it. It just wouldn’t be possible,” he added.

Then, referring to the chairman of Melco Crown, Lawrence Ho Yau Lung, Mr Harary stated: “Lawrence Ho… saw an opportunity. But more than that, he took a chance. He believed in my magic. And he put a whole pot of money into a place where it [mass entertainment] has never been tried before.”