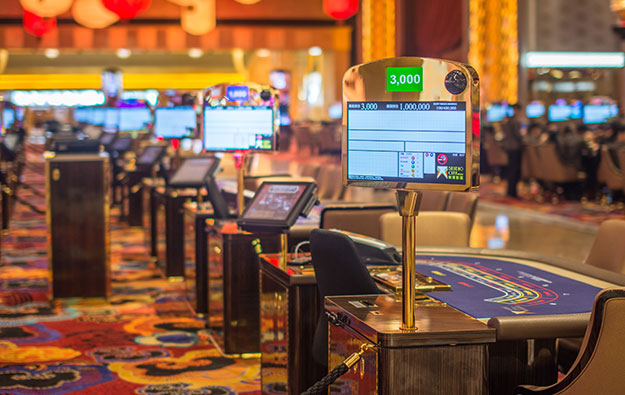 The Studio City casino resort in Macau might introduce some house-managed VIP tables to its gaming mix, after it receives an allocation of a further 50 new-to-market gambling tables from the territory’s government in January.

So said a note on Tuesday from analyst David Bain of brokerage Sterne Agee CRT.

The note was issued after the institution hosted investor meetings with Geoffrey Davis, the chief financial officer of Melco Crown Entertainment Ltd, the Macau casino operator that developed and manages the Studio City property. Melco Crown holds a 60 percent stake in the casino resort.

The US$3.2-billion Studio City established a first for a large new Macau casino resort when it opened on October 27. It had an initial government allocation of 200 new-to-market gambling tables, but not a single VIP table in operation – either promoted by a junket or managed by the house.

Lawrence Ho Yau Lung, co-chairman and chief executive of Melco Crown, said that was a “business decision” and not a requirement of the city’s government, which is seeking to move Macau’s tourism market away from a dependence on hardcore gambling. The government promised Studio City a further 50 tables from January.

“Melco Crown’s new 50-table allocation will be earmarked mass, though it could later rebalance its mix to a small proportion of direct VIP as it begins to optimise yield,” said Mr Bain.

The analyst added: “Management’s analysis shows new properties typically take eight to 18 months to ramp toward Macau win per day averages. Although Studio City has opened into a more trying environment versus any other opening in Macau’s history, it believes it can attain aforementioned levels within the first half of the time frame…”

Mr Bain said management made that assertion on the basis that a significant portion of Studio City’s table dealers had been transferred from other Melco Crown properties and were skilled at dealing a high number of hands per hour.

A note from Wells Fargo Securities LLC analyst Cameron McKnight and his colleagues on December 17 said the brokerage’s checks indicated visitor numbers at Studio City were “tracking up 20 percent to 30 percent” sequentially in December, “following what we believe was disappointing foot traffic in November”.

Carlo Santarelli of Deutsche Bank Securities Inc said in a statistical update on the Macau market issued on December 18 that Macau’s Cotai district would see a further 8,800 hotel rooms added to the market between June 25 next year – when Wynn Macau Ltd’s Wynn Palace resort opens – and the end of 2017, when SJM Holdings Ltd’s Lisboa Palace resort is due to be ready.

Mr Bain of Sterne Agee CRT noted: “While cannibalisation from Studio City’s opening is likely tilted toward Cotai properties, including its City of Dreams given City of Dreams is helping drive initial visits [to Studio City] through its database, Melco Crown believes cannibalisation will ultimately tilt toward the [Macau] peninsula as visitation traffic continues to increase to Cotai.”

The investment community acknowledges that headwinds remain for the Macau market in terms of regulatory issues.

Christopher Jones and John DeCree of Union Gaming Research LLC said in a note on December 18 that under the new monitoring rules for transactions by mainland China customers in Macau via China UnionPay Co Ltd-enabled cards, not only would the cardholder have to present an identity document to the merchant, but also a new point of sale system would generate an image of the customer registered to that card, so that the merchant can check the person in the shop is the actual cardholder.

The Monetary Authority of Macao has said enhanced scrutiny of UnionPay transactions would be focused on what it referred to as “high risk merchants near casinos”.

Mr Bain of Sterne Agee CRT said conversations with Melco Crown management had indicated that the increased UnionPay scrutiny would be likely to “continue an already in-place chilling” effect on the mood of some would be Macau patrons.

Macau’s casino gross gaming revenue (GGR) for the first five days of February is estimated at MOP1.9 billion (US$235.1 million) – or MOP380 million per day – a level that suggests a “45... END_OF_DOCUMENT_TOKEN_TO_BE_REPLACED