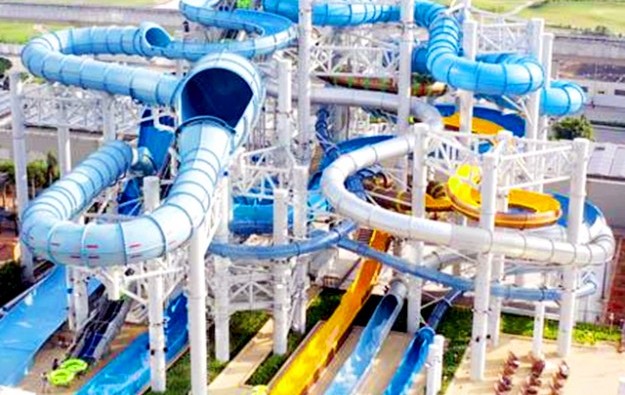 A new family-entertainment focused water park at Studio City – a Cotai property promoted by Melco Resorts and Entertainment Ltd – is going to be launched on “May 22”, the company has confirmed to GGRAsia.

Melco Resorts also said that “all” the attractions at “Studio City Water Park”, are to be launched on that date. They include a five-slide tower called “The Highpoint Twister” (pictured), and Golden Bucket, according to the company.

A promotional package inclusive of “limitless entries” for certain defined days between the launch and October, typically the end of pool season in Macau, is already available for purchase on the property’s official website.

The new water park is part of the second phase development of Studio City. Other parts of that phase are now under construction, according to the 2020 annual results filed on Wednesday by Hong Kong-listed Melco International Development Ltd. The latter is the parent of Melco Resorts.

The new phase at Studio City will also include gaming space and several non-gaming attractions, including a multi-screen cinema, “fine-dining restaurants” and space for meetings, incentives, conferences and exhibitions (MICE), according to the results document.