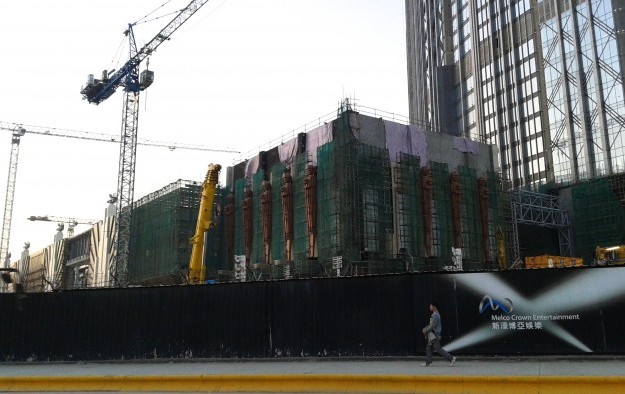 Japanese brokerage Nomura says it has downgraded Asian casino developer Melco Crown Entertainment Ltd (MPEL) from ‘neutral’ to ‘reduce’. It warns of a possible 4.2 percent downside to Melco Crown’s share price from a Thursday close of US$21.92, citing the likely “limited value” from the opening of the firm’s majority owned US$3.2-billion Studio City casino resort (pictured) in Cotai, Macau.

“Where we probably differ most from our sell side colleagues is in the limited value we ascribe to MPEL’s new casino, Studio City, which should open in the third quarter of 2015,” said Friday’s note from Harry Curtis, Kelvin Wong and Brian Dobson.

Nomura added that Wall Street consensus was for Studio City’s 2016 earnings before interest, taxation, depreciation and amortisation (EBITDA) to reach US$457 million, whereas the brokerage was estimating 2016 EBITDA of under half that, at US$198 million.

“Our forecasts imply a first-year ROIC [return on invested capital] of 8.6 percent, which may not be greeted with enthusiasm by investors. This probably explains why our US$21 [share price] target is nearly 20 percent below consensus.”

Melco Crown’s shares ended Friday’s trading on Nasdaq in New York up 0.32 percent, at US$21.99 per unit, according to Bloomberg data.

In a note in late March, Wells Fargo Securities LLC had said that the annual policy address on March 23 of Macau’s Chief Executive Fernando Chui Sai On had implied Macau gross gaming revenue (GGR) for 2015 might fall by as much as 32 percent year-on-year.

Nomura said in its note on Friday that it estimated that, on a “same store” basis, Macau EBITDA market wide might fall by 26 percent in 2015 and decline by 2 percent in 2016. Those particular estimates excluded any potential positive market impact from Studio City.

In March Morgan Stanley Research Asia Pacific said in a lengthy report on Macau that there were question marks about whether future increases in Macau casino supply would drive increases in demand from players, as had happened with previous openings.

“Incremental visitors have smaller pockets. Mass revenue per Chinese visitor [in Macau] is trending lower in the last 12 months,” noted Morgan Stanley, referring to growth in the ‘grind’ mass market in Macau compared to a downturn in revenue from some VIP and premium mass gamblers in Macau. Some investment analysts have linked the decline in VIP play to the mainland’s anti-corruption campaign and other market cooling measures.

In late January Nomura suggested in a note that ROIC on new Macau projects could decline to 15 percent per year from 25 percent.

In its latest note Nomura said Macau infrastructure – including the way the city moves visitors around once they get there – must improve before Melco’s ROIC on Cotai can reach 15 percent.

“We doubt that the Macau government will allow the annual visitation growth of 20 percent in both 2016 and 2017 that we calculate would be required to generate reasonable returns on new casino investment,” stated the Nomura team.

Last year mainland visitor numbers were up 14 percent, while the increase for all visitors was nearly 8 percent year-on-year to 31.5 million. The Macau government has already asked Beijing to “improve” the system that lets independent Chinese travellers visit Macau, without explaining what that might mean in practice.

“The [Macau] peninsula is often a mass of congestion, so until the light rail system is ready to transport a potential 40 percent increase in customers from key immigration checkpoints, we believe that demand growth will be below the growth in new capacity,” stated Nomura, referring to the territory’s much delayed and over-budget light rail transit (LRT) system.

Melco Crown has not yet said how many gaming tables Studio City will have.

On April 14 the Macau government stated it had still not decided how many gaming tables would be granted to Melco Crown’s Macau market rival Galaxy Entertainment Group Ltd for the latter’s May 27 opening of its HKD19.6-billion Galaxy Macau Phase 2. The firm has said in previous public statements that it has capacity for 500 tables and 1,000 slot machines.

A Macau court was told on Wednesday that Asian American Entertainment Corp Ltd (AAEC), led by Taiwan businessman Marshall Hao Shi-sheng, was to blame for its failed tie-up with United States-based... END_OF_DOCUMENT_TOKEN_TO_BE_REPLACED