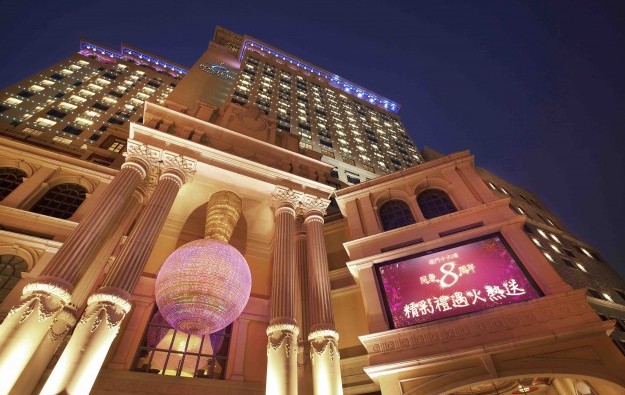 Hong Kong-listed casino investor Success Universe Group Ltd is moving forward with its construction plan for the third phase of its flagship Macau casino and hotel investment Ponte 16, the firm’s executive director and deputy chairman, Hoffman Ma Ho Man, told GGRAsia in an interview. The firm is yet to decide on the mix of gaming products for the new phase.

The last time that a third phase for Ponte 16 had been mentioned in Success Universe filings to the Hong Kong Stock Exchange had been in its interim report 2014. The document had noted the third phase was “under review… by the Macau Government”.

The planned extension would have a gross floor area of approximately 40,000 square metres (430,556 sq feet), consisting of “a shopping arcade, an entertainment and recreation complex, dining destinations as well as gaming zones,” according to the 2014 interim report.

Mr Ma did not confirm those details would all still apply, but told us that the intended budget for the shopping arcade was HKD800 million (US$103.1 million), and construction would take a year and a half once the green light was given.

Asked when that might be, Mr Ma said: “We are still working out the new construction plan that can comply with the new [i.e., updated] Macau law [relating to planning matters]. After that we will still need to get approval.”

He explained: “Our direction [regarding the third phase of Ponte 16] has not changed. But until this date, we still have to calculate the gaming mix for the project, and consider the Macau government’s gaming table cap policy.”

“We expect that the government would strictly maintain its [table] cap,” he added.

As at December 31, 2015, the casino at Ponte 16 had 108 gaming tables, consisting of 92 mass gaming tables, nine high-limit tables and seven VIP tables, according to Success Universe’s annual report for 2015. The report didn’t mention how many gaming machines were offered by Ponte 16′s casino.

Macau casino operator SJM Holdings Ltd supplies the gaming licence to the property, which is located in the city’s Inner Harbour district. SJM Holdings is also an equity partner in the Ponte 16 project.

While Success Universe is still designing the mix of gaming products for Ponte 16′s third phase, it is also making adjustments to the design of the construction plan, Mr Ma told GGRAsia.

“For instance, the government told us that our intended retail area [for third phase] was too near the clock tower [of Pier 16], and hence we had to make some changes,” Mr Ma said.

“These years Macau has amended its Land Law, and also rules regulating the protection for cultural heritage. These amendments affect the design of projects in the [Inner Harbour] district,” Mr Ma said. “And as a result, we also had to make adjustments to our construction plan [for the third phase].”

The Success Universe executive said his firm nonetheless supports the Macau government’s efforts to “rejuvenate” the Inner Harbour area; a move that can bring more tourism value to the district.

According to the “Macao Tourism Industry Development Master Plan”, first launched in May for public consultation, the Inner Harbour area will be transformed into a “retail, alfresco dining and commercial waterfront district”. The government’s “medium-term” plan is to see some of the warehouses in the Inner Habour district converted to spaces that can house shops or catering businesses.

“We are definitely supportive of this direction pursued by the government because this would become a new tourism feature in Macau and is worth more promotion,” Mr Ma remarked, adding that he would welcome greater transparency from the government regarding how such a rejuvenation plan for the Inner Harbour might be achieved.

“With Ponte 16, also located at the Inner Harbour area, we have always hoped that we can help direct more pedestrian traffic to the area and make a spillover [of such traffic] to the local shops in the district, bringing more business opportunities..,” Mr Ma said. “The policy direction pursued by the government also appeals to local residents,” he added.

The Macao Tourism Industry Development Master Plan aims to set the direction of the sector’s future over the next 15 years. The government expects the final version of the master plan to be ready by mid-2017.

Pragmatic Play Ltd, a content provider to the iGaming industry, has launched a new slot game called “Monster Superlanche”. The game is played across 6×5 reels, with colourful ‘monsters’... END_OF_DOCUMENT_TOKEN_TO_BE_REPLACED