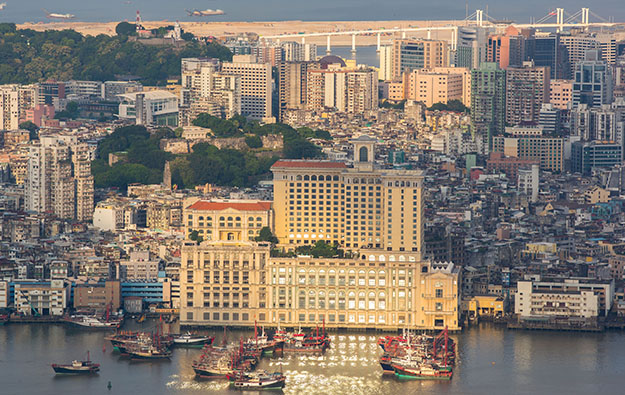 Macau casino investor Success Universe Group Ltd posted a net loss of approximately HKD21.1 million (US$2.7 million) for the six months to June 30, compared to a loss of HKD12.6 million in the prior-year period.

The company saw its revenue decline by 17.9 percent year-on-year to about HKD284.8 million, the firm said in a filing to the Hong Kong Stock Exchange on Wednesday.

Success Universe is a joint venture partner – alongside a unit of gaming operator SJM Holdings Ltd – in casino hotel Ponte 16 (pictured), located on the Macau Peninsula. The company’s shared profit relating to Ponte 16 amounted to about HKD7.2 million in the first half of 2017, down 32 percent from a year earlier.

Ponte 16’s adjusted earnings before interest, taxation, depreciation and amortisation fell by 5 percent year-on-year to HKD136.3 million. As at June 30, the casino at the property had 109 gaming tables, consisting of 96 mass gaming tables, seven high-limit tables and six VIP tables, according to the latest filing.

“The decline in results was mainly attributable to the decrease of the group’s share of profit of the associates relating to Ponte 16; and decrease in operating revenue and increase in loss of the group’s travel business,” said Success Universe.

The firm said the travel segment recorded a loss of HKD8.3 million in the reporting period, up from HKD3.6 million a year earlier. It included an impairment loss on intangible assets of HKD2.2 million, according to the company.

Success Universe said it had renovated the hotel rooms at the property, with the the average occupancy rate reaching 89 percent in the first half of 2017. The company’s executive director and co-chairman Hoffman Ma Ho Man told GGRAsia in June that the firm would be revamping its gaming zones for VIP play and “high-limit” in the near future.

Ponte 16 is located in the city’s Inner Harbour, an area that suffered serious flooding during Typhoon Hato, which struck Macau on August 23. The gaming area on the ground floor of Ponte 16 had reportedly suffered flooding to a depth of up to three feet (0.91 metres), with casino operations suspended for a few days in the aftermath of the typhoon.

The imminent return of package tours from mainland China will not only help boost Macau’s tourism businesses, but is also expected to help casinos gain more foot traffic in their mass gaming... END_OF_DOCUMENT_TOKEN_TO_BE_REPLACED