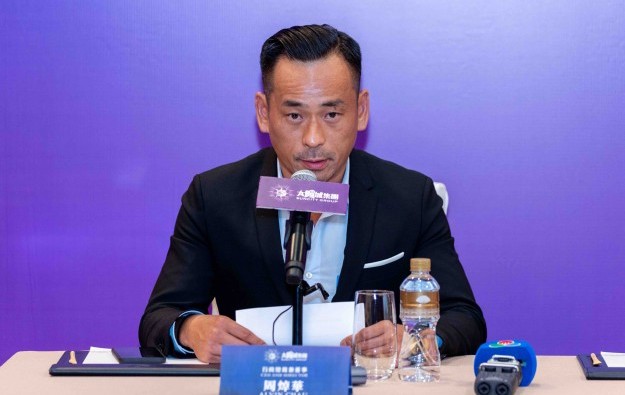 Alvin Chau Cheok Wa (pictured), chief executive of Macau junket brand Suncity Group, read out a short, prepared statement at a Saturday press conference in Macau, denying that the group’s Macau-government-licensed gaming promoter had anything to do with “online gaming”. The group as a whole had first issued a denial on Monday last week, following claims in Chinese state-backed media.

Mr Chau went off script only once, to stress his group had not violated any laws of China or of the Macau SAR; that he was not being investigated by authorities in mainland China; and that he was not on what he termed China’s “wanted” list.

Mr Chau did not take any questions from the assembled media – some of them from Hong Kong – before leaving the venue at the Mandarin Oriental Macau. The whole event lasted fewer than 15 minutes.

Mr Chau also said in the statement he was “deeply sorry” for what was described as “inconvenience” caused to the Macau government and the “possible negative impact on Macau gaming concessionaires” caused by Chinese media allegations of the Suncity brand’s involvement in “online” and “proxy” gambling by Chinese players at overseas locations.

The Suncity boss’s announcement added: “We hope that the concerns generated in both mainland China and the Macau SAR will be eased.”

His prepared statement also said he “appreciated” the work of the media in “supervising the company”, and added “no legal actions against any media will be taken for this incident”.

His prepared statement also mentioned that even if certain activities were “licensed” outside Macau, his group would not be involved in them if they were contrary to Macau law.

The statement further said: “Sun City Gaming Promotion Co Ltd operates junket promoting business legally. The company and other related companies around the world are officially licensed. The company has not operated the so-called online gaming platform, which is promoting gaming and conducting monetary settlement in mainland China without physical gambling chips.”

The statement added: “Company profit has not exceeded the revenue of China Lottery, and absolutely has not disturbed the national financial order.”

It mentioned also: “All turnover data and income of the company are officially announced by authority [sic] every month.”

The announcement was countering claims in a Chinese state-backed media outlet Economic Information Daily and an official Chinese news agency, Xinhua, that customers of the Suncity brand had been recruited while in Macau for an online gaming app that could be played outside China.

Paulo Martins Chan, the director of Macau’s casino regulator, the Gaming Inspection and Coordination Bureau – a body also known as DICJ – had reiterated in a meeting on Wednesday with Macau’s six casino operators that online gaming within Macau was illegal.

In a meeting the same day with representatives of the junket sector, Mr Chan reminded those present that any breach of the law – even if outside Macau – could impact a junket’s suitability to hold a Macau junket licence.

The previous day the DICJ held a meeting with Suncity, which the gaming bureau had said was in order better to “understand the situation” regarding claims that the brand was involved in “online gaming” and “proxy betting” activities.

Saturday’s statement as read out by Mr Chau further mentioned that “the company has always complied with the laws and regulations of the Macau SAR, and this will continue to serve as the standard for future operation of the group’s products and services.

It added: “For any products that are legally allowed to operate in other countries and regions, the company will not adopt them if the laws of Macau do not allow it and will strictly adhere to the law of Macau.”