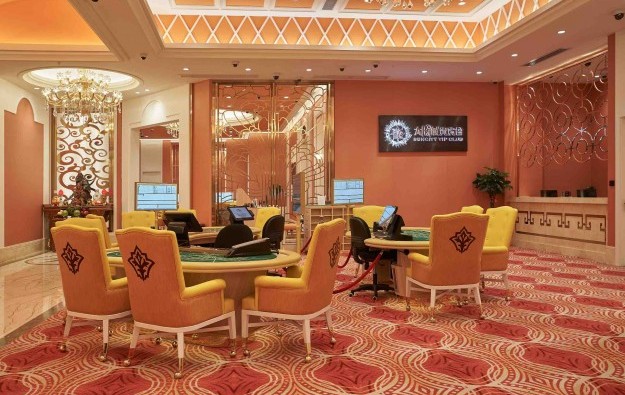 The number of VIP clubs operated globally by major Macau junket firm Suncity Group has increased to 31 with the latest addition in Cambodia, the privately-held firm said.

It means 45 percent of its high-roller gambling clubs – or 14 in total – are now outside Macau, in other parts of the Asia-Pacific region

The newest VIP club, branded as “XiGang International Suncity VIP Club” (pictured), became operational in May on the second floor of the Xihu Resort Hotel, a beachside resort with a casino in Sihanoukville, Cambodia.

A ceremony took place on Saturday to celebrate the official opening of the club, which features 20 gaming tables in three rooms, the company said in a press statement on Sunday.

The facility is its second VIP club in Cambodia. It also has junket operations in the second phase of NagaWorld, a casino resort in that nation’s capital Phnom Penh. NagaWorld is operated by Hong Kong-listed NagaCorp Ltd.

The Naga 2 facility opened in February 2018 on the 23rd floor. That Suncity club offers 15 gaming tables across four rooms.

A ceremony — attended by Alvin Chau Cheok Wa, chief executive and director of Suncity Group — was held to mark the first anniversary of the club two days prior to the opening ceremony of the Suncity VIP club in Sihanoukville.

The two VIP rooms in Cambodia bring the total number of VIP clubs run by Suncity Group in the Asia-Pacific region beyond Macau to 14, alongside the 17 clubs in the Chinese special administrative region, a representative of Suncity Group clarified to GGRAsia.

In addition to the Suncity VIP clubs, the group also operates two Poker King Clubs – one in Macau and one in Manila, the representative added.

Besides its role as a middleman supplying mainland Chinese high rollers to casinos, the Suncity brand has been moving into casino operations.

Suncity Group Holdings Ltd – a Hong Kong-listed entity controlled by Mr Chau — announced in October it had signed a deal to run casino operations in a US$360-million resort at Otres Beach in Sihanoukville. It will open by the first quarter of 2020.

The listed entity also has an equity investment in a Vietnam casino resort project called Hoiana, that is due to have a first-phase launch later this year. The listed firm will also manage gaming there.

International casino operator Las Vegas Sands Corp has been ranked as the most sustainable firm in the global casino sector, according to the 2023 edition of the S&P Global Sustainability... END_OF_DOCUMENT_TOKEN_TO_BE_REPLACED