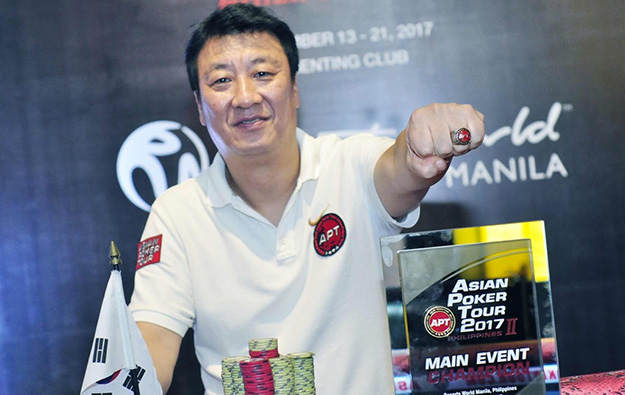 South Korea’s Sung Ho Kim (pictured) was the winner of the main event of the second Philippine leg of the 2017 edition of the Asian Poker Tour (APT). The player took home US$40,250, according to a Thursday press release from the tournament organisers.

The five-day main event featured a total of 132 entries and a total prize pool of US$192,060, the release added. It took place at Resorts World Manila, a casino property operated by Travellers International Hotel Group Inc. The latter is a venture between Philippines-based Alliance Global Group Inc and casino cruise ship investor Genting Hong Kong Ltd.

The first Philippine leg of the 2017 edition of the Asian Poker Tour took place in July at Winford Hotel and Casino – operated by a subsidiary of the Manila Jockey Club Inc – in Metro Manila.

The next tournament of the Asian Poker Tour 2017 will take place between October 20 and 29, in Noumea, New Caledonia, a French-controlled archipelago in the South Pacific.

The Asian Poker Tour was founded in 2008 and held its first event in May that year, in Manila. It has staged several major events and numerous smaller tournaments mainly in the Asia Pacific region. The tour has visited Macau, South Korea, the Philippines, Cambodia, Vietnam, India, Australia, the United Kingdom, and Mauritius.

The imminent return of package tours from mainland China will not only help boost Macau’s tourism businesses, but is also expected to help casinos gain more foot traffic in their mass gaming... END_OF_DOCUMENT_TOKEN_TO_BE_REPLACED