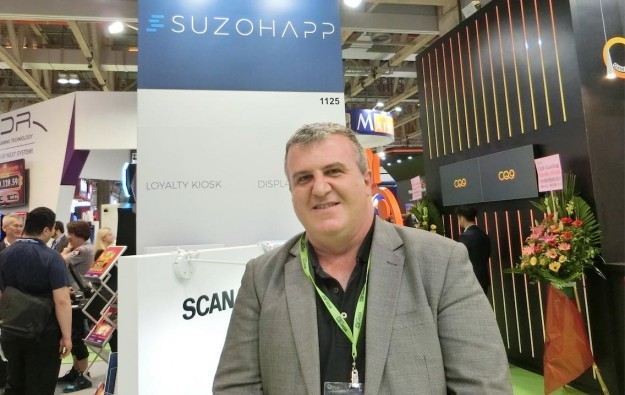 The firm is also about to release its first cash redemption machine (CRT) for global sale in the “next six to eight weeks,” he added. SuzoHapp is well known in the casino industry for its development and distribution of machine components for equipment operators and original manufacturers.

“There is a lot of interest around the globe for this product [chip dispensing machine]; as wages and cost of employees go up, people are looking for ways to try to reduce overheads,” Mr McDowell told GGRAsia. The product will first go live in Australia next month, he added. Mr McDowell was speaking at the Global Gaming Expo (G2E) Asia 2017, held in Macau from May 16 to 18.

SuzoHapp is aiming to have the chip dispensing machine working as a “satellite cage” on casino floors, said the firm’s executive.

“We are also about to release our first cash redemption terminal for bill breaking and also cashing the tickets from the gaming floor,” said Mr McDowell. “We are releasing that product in the next six to eight weeks. And that will be available for sale globally.”

The firm has seen a lot of interest from kiosk manufacturers at the trade show, said the SuzoHapp executive.

SuzoHapp is looking towards Asia as a “big growth market” in the next five years, especially with Macau, Philippines and Japan – though Japan is still in the process of drafting the implementation bill that regulates casino resorts, Mr McDowell said.

“We obviously want to be a player in the [Japan] market when it does break … a lot of [gaming] concessionaires we are dealing with globally will be in that market, so we want to continue that relationship and support them, and to enter new ventures as well,” Mr McDowell stated.

“We have been serving the market globally for a long time; we are very experienced in building gaming equipment, and supporting our OEMs [original equipment manufactures]. So I think there’s a place for us in that [Japan] market as well,” he added.

The Macau government announced on Thursday the cancellation of a plan for a nucleic acid test certificate requirement with 48 hour validity, for casino staff, casino customers and official visitors... END_OF_DOCUMENT_TOKEN_TO_BE_REPLACED