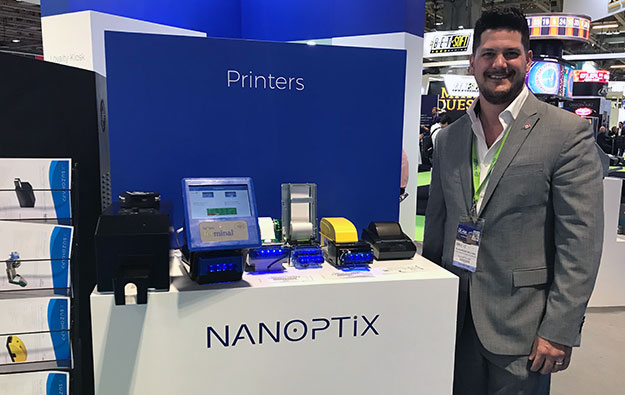 Nanoptix Inc expects that a global distribution agreement, signed in November with casino cash handling and transaction technology specialist SuzoHapp Group, will help Nanoptix increase its market share in Asia. That is according to Rejean Belliveau (pictured), the firm’s global director for sales and marketing.

Nanoptix designs and manufactures thermal printers for use at point of sale, and in the lottery, gaming and kiosk markets. The company was founded in 1996 and is based at Dieppe, in New Brunswick, Canada.

The November agreement gives SuzoHapp global-distributor status for all Nanoptix printers. The latter firm’s products were on display at SuzoHapp’s booth at the Global Gaming Expo (G2E Asia) 2018, a casino trade show and conference that took place last month in Macau.

The company expected strong sales growth in Australia and Asia,”as well as in Europe,” Mr Belliveau told GGRAsia, commenting on the deal with SuzoHapp. “It has been very exciting adding such a great partner like SuzoHapp in order to really give us the global reach that we have been searching for.”

Nanoptix is introducing to the market its PayCheck NextGen printer, which it claims is the fastest available in the gaming industry. It also offers other products under the PayCheck series, including a desktop printer and a Linux-based kiosk terminal associated to a printer.

The Nanoptix executive said the firm’s presence is Asia is currently still “very limited”. One of the reasons for that, Mr Belliveau explained, is because its previous flagship printer was called ‘PayCheck 4’, the number ‘four’ being considered unlucky in some Asian cultures.

“Nanoptix is starting to be known [in Asia] and I think the more we take the time to focus on Asia, the people will start realising we are here to stay, we are here to work hard and satisfy our customers, move forward and grow,” Mr Belliveau stated.

He added that while many manufacturers still deal with Nanoptix directly to source printers for their products, SuzoHapp provides the firm a platform to promote its printers to casino operators. “The partnership has been really good,” he said.

Australia is currently the firm’s biggest market, as the company’s printers are the “global default” for products by Australia-based Aristocrat Leisure Ltd, stated Mr Belliveau. “In Asia there is still a bit of the ‘pull element’, where casinos may request a specific printer, so Aristocrat cannot always use us, but where they can, they do, and it has helped us quite a bit.”

Mr Belliveau said the partnership with SuzoHapp – which began being discussed in October 2017 – fits well Nanoptix’s distribution needs. “One of our challenges has always been the depth of our reach,” he noted.

“We are distributed across all the different OEMs [original equipment manufacturers]… We are not the biggest company, but we are growing every year,” the Nanoptix executive added.

Package tours from mainland China to Macau will resume from Monday, February 6, confirmed Macau’s Secretary for Economy and Finance, Lei Wai Nong, in a Friday press conference. The return of... END_OF_DOCUMENT_TOKEN_TO_BE_REPLACED