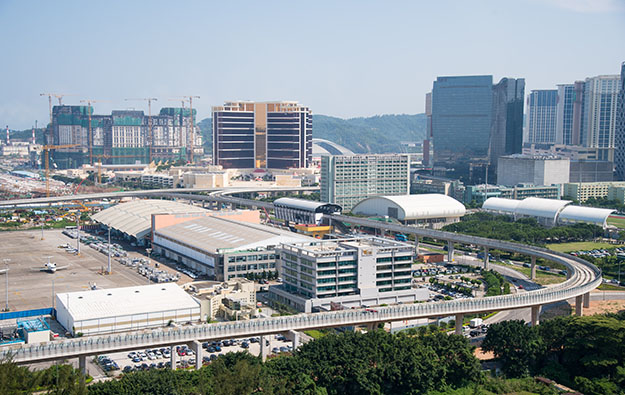 The Macau government said on Tuesday that the Taipa-Cotai section of the under-construction light rail transit (LRT) system – designed to move visitors and locals around the city – is scheduled to be operational in the second half of this year.

The city’s Transportation Infrastructure Office said in a press release that the Taipa-Cotai portion of the LRT system was currently undergoing operational testing.

The Taipa-Cotai portion of the project (pictured in part), which includes stops serving the Cotai casino resorts, will be 9.3-kilometres (5.8-miles) long and have a total of 11 stations. That stretch of the system will also connect to Macau International Airport and the Taipa Ferry Terminal located near the airport.

The office stated in its press release that the LRT fare system had not been set yet.

The bureau added that it expected to complete construction of the Barra station on the Macau peninsula by 2024. The latter station will be the first stop connecting the peninsular section of the LRT system to the Taipa-Cotai section via the Sai Van bridge.

No timetable has yet been announced for the start of construction on the remainder of the Macau peninsula section of the rail link.

The launch of the public tender for the construction of the Seac Pai Van section – a district located between Cotai and Coloane – was scheduled for the first quarter of this year, the Transportation Infrastructure Office added.

The Taipa-Cotai section of the LRT system was originally slated to start operating in 2016. The bulk of construction on that stretch of the system began in 2012.

The Macau government has hired Hong Kong’s MTR Corp Ltd – which manages the underground railway system in the former British colony – to manage and provide consultancy services for the LRT project.