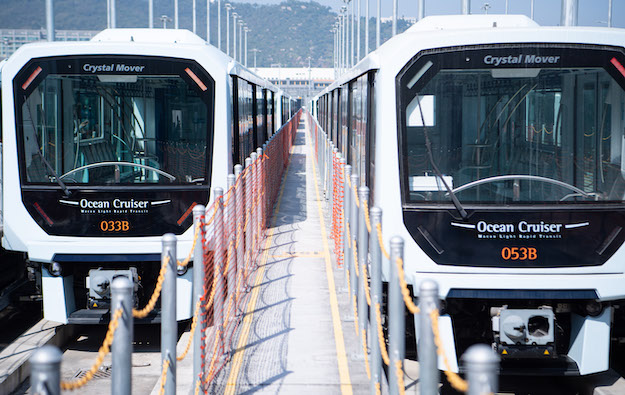 The Taipa to Cotai section of Macau’s Light Rapid Transit (LRT) system (pictured in a file photo), which opened on Tuesday afternoon to the public, might see “20,000″ passenger journeys daily, said Macau’s Secretary for Transport and Public Works, Raimundo do Rosário, in comments to media on the sidelines of an inauguration ceremony that morning.

The service is free for the rest of December, but from January 1 next year payment will be required, with the maximum price of a single-journey fare set at MOP10 (US$1.24) according to a Tuesday announcement in the city’s Official Gazette.

The first public passenger service set off from the station serving Taipa’s Pac On ferry terminal at 3.33pm on Tuesday. The Taipa portion of the LRT project – which includes stops serving the Cotai casino resorts – is 9.3-kilometres (5.8-miles) long and serves 11 stations. That stretch of the system - there has been discussion about extending the LRT network to serve most parts of Macau peninsula – is also connected to Macau International Airport at Taipa.

Mr Rosário declined in his comments to media to give details about other planned extensions of the LRT: namely to Seac Pai Van, an area of Coloane – to the south of Cotai – that includes a public housing estate; and to Hengqin Island, part of mainland China territory next door to Macau. But the official said the target for linking the Taipa-Cotai line across water to Barra district on Macau peninsula – via a line carried on the Sai Wan Bridge- was “the year 2023”. The budgeted cost for the link to Barra was “MOP4.5 billion” (US$557.9 million), he added.

The construction of the Taipa to Cotai section of the LRT – which started in 2011 – has cost about “MOP10.1 billion to MOP10.2 billion”, Mr Rosário remarked. That is below an earlier estimate from the government that mentioned MOP11 billion, though it is still close to three times a 2007 forecast by the Macau authorities.

From January, passengers have to pay MOP6 for rides covering one to three stations – excluding departure point; MOP8 for journeys encompassing four to six stations; and MOP10 for journeys covering seven to 10 stations, according to the Official Gazette. Passengers that pay the LRT fares with a special electronic stored-value card due to be linked to the network would enjoy a 50-percent discount. The government has previously said that Macau Pass – a stored-value card used on Macau buses and in some of the city’s shops – would not be used on the LRT.

Several gaming analysts have noted previously that public infrastructure projects, such as the LRT system, would be a positive for the casino industry as it could deliver more efficiently mass-market gaming customers to the Cotai properties from Macau entry points including Cotai’s Lotus Bridge, the airport, and the Taipa ferry terminal.

Delivery of the LRT service has been the subject of delays and cost rises. Ho Cheong Kei, president of Macao Light Rapid Transit Corp Ltd, said at the Tuesday ceremony that the LRT project had seen “numerous difficulties and challenges”, but the government would work to “expand the coverage” of the mass transit system.

Visitor volume to Singapore grew by 472.2 percent year-on-year in the first four months of 2022, to 540,430, according to data issued by the city-state’s tourism board. The four-month figure is... END_OF_DOCUMENT_TOKEN_TO_BE_REPLACED