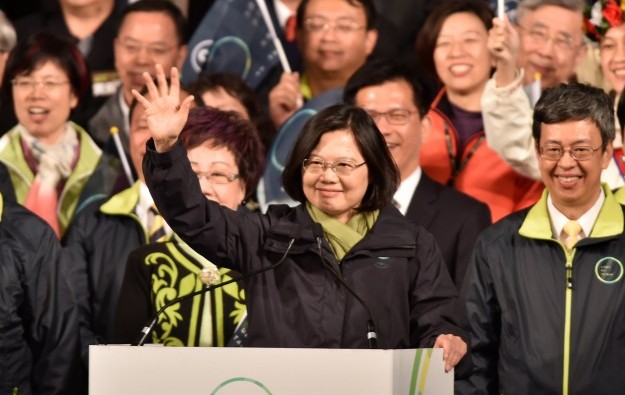 The landslide win of Taiwan’s independence-minded Democratic Progressive Party (DPP) in Saturday’s elections could make it hard to move forward with gaming expansion including legalisation of casinos, said a note from Union Gaming Securities Asia Ltd on Monday.

Tsai Ing-wen (pictured centre), the DPP’s presidential candidate, won 56 percent of the vote, becoming the island’s first female leader. In elections also held on Saturday for the parliament, called the Legislative Yuan, the DPP won 68 of the 113 seats up for grabs, compared with only 35 for the ruling Kuomintang. It marked the first time the Kuomintang – with a much more pro-China stance relative to the DPP – has lost control of the island’s legislature.

“Separately, President Tsai has personally gone on record as being anti-gaming during the recent election cycle, and she had instructed DPP legislators in 2009 to vote against the bill to allow gaming referendums,” he added.

Taiwan lifted a 15-year prohibition on gambling on its outlying island chains of Kinmen, Matsu and Penghu in 2009. In a referendum in July 2012, the residents of Matsu voted in favour of casinos in that county to help attract tourists.

Taiwan’s Central News Agency reported in November that residents of Penghu would probably vote again this year on whether to allow casinos in the county. The local government’s Referendum Screening Committee has reportedly approved a proposal to hold a referendum early this year, but any such poll is still dependent on collecting enough assenting signatures from local residents and would need approval from Taiwan’s executive branch of government.

“If a referendum [in Penghu] is ultimately held it would likely occur this spring,” said Union Gaming’s Mr Govertsen.

“Heading into 2016 – and before the election of the DPP – there was chatter that the government would finally move forward with a gaming bill to allow Matsu (which already voted in favour of casinos), or any other outlying islands that pass a local referendum, to conduct an RFP [request for proposal] process,” he added.

The brokerage however remains “somewhat pessimistic” about the chances of the required legislation moving forward while the DPP is in power.

Taiwan’s relationship with mainland China warmed during the eight years of Ma Ying-jeou’s presidency. But in May last year Xinhua reported that the Chinese authorities had ruled out the possibility of mainland China citizens being allowed to gamble in Taiwan casinos if such schemes ever come to fruition.

“With the DPP now controlling the levers of government in Taiwan, we would expect this already hard-line approach to mainlanders potentially gambling in Taiwan to harden further still,” said Mr Govertsen.

Union Gaming said it does not expect the Macau-based casino operators to participate in a request for proposal in Taiwan for what it describes as “three important reasons”.

“Given that policy is so important in driving the future of Macau, none would dare risk raising the ire of Beijing; the calculus has changed as the current (and future) Chinese VIP story is radically different than years past; and the explicit forbidding of mainlanders to gamble in Taiwan (if true) would result in the one-two punch of both a weak demand story and upsetting Beijing,” it said.

The brokerage additionally said that regional operators could also “shy away from the prospects of developing integrated resorts on Taiwan’s outlying islands absent a policy shift to allow mainlanders to gamble, as well as [absent] the setting of modest development budget requirements”.

“That said, there is clearly an appetite for gambling in Taiwan … and there would be significant interest in large-scale development if integrated resorts were approved for cities like Taipei or Kaohsiung,” wrote Mr Govertsen.

Casino equipment supplier Sega Sammy Creation Inc said in a Friday release it was debuting its Genesis Crest 43J cabinet in Asia. The product will be available at an in-person trade show, G2E Asia:... END_OF_DOCUMENT_TOKEN_TO_BE_REPLACED