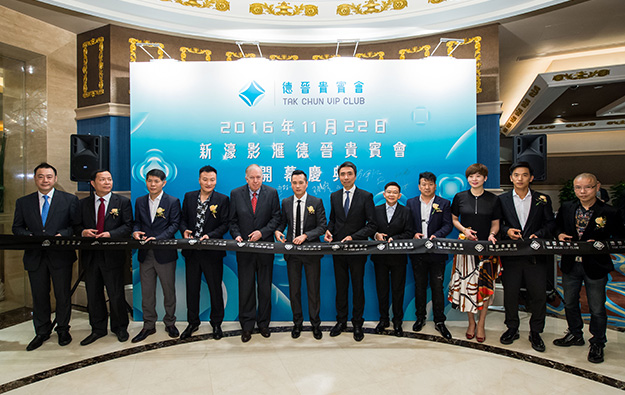 Macau VIP gambling promoter Tak Chun Group has held an opening ceremony for its nine-table high roller facility at the Studio City casino resort in the Cotai district of Macau.

According to a Tuesday press release from Tak Chun, the tables allocated to the firm are spread across four VIP rooms in 1,000 square metres (10,764 sq feet) of space assigned to the junket promoter on the second floor of the Star Tower – one of two hotel towers at Studio City.

When the mass market-focused Studio City opened on October 27 last year, it did so without any VIP tables – the first time a large-scale Macau gaming resort had tried such a strategy.

Subsequently Melco Crown – which has a 60-percent interest in Studio City – said in filings that the ramp-up of gaming had been slower than anticipated, and that it was taking steps to optimise casino operations at the property

Melco Crown confirmed in its November 1 email to GGRAsia that it would be allocating a total of 33 tables for VIP gaming at Studio City. The firm did not disclose from where it would be transferring the tables.

The company had previously said that two-thirds of Studio City’s VIP gaming tables would be allotted respectively to Tak Chun and Suncity, while one-third would be for the company’s premium direct customers – a term referring to VIP players directly managed by the casino.

A gala dinner featuring a performance by Hong Kong pop singer William So Wing Hong was also scheduled as part of the opening celebrations,

Tak Chun would “continue to focus on setting up new outlets in the five-star hotels and resorts in both Taipa and Cotai in order to actively renew the group’s visibility, market position and premium services,” added the release, referring first to a mainly residential part of Macau where five casino properties are located.

Casino operator Melco Resorts and Entertainment Ltd announced on Thursday that it would launch at the end of June a new, themed zone for “family-friendly” entertainment at its majority-owned... END_OF_DOCUMENT_TOKEN_TO_BE_REPLACED