Talk to us re smoke lounge retention: Macau casino staff 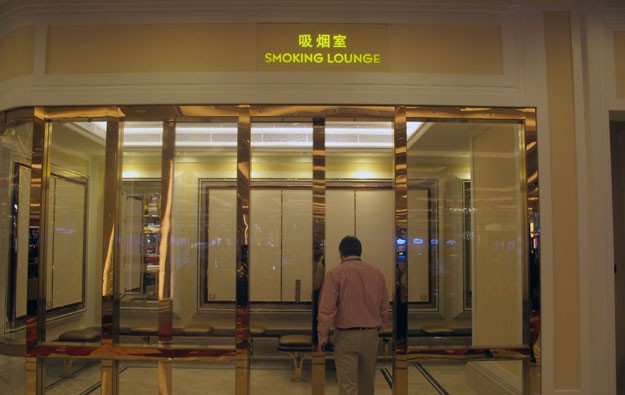 Two of Macau’s gaming labour groups have separately told GGRAsia they want the government to explain further how a proposal to retain smoking lounges on Macau gaming floors can still protect casino workers from the risk of harm from second-hand smoke.

Their comments – made by representatives from, respectively, Macau Gaming Enterprises Staff’s Association, and Power of the Macao Gaming Association – followed an announcement on Thursday by Macau’s Secretary for Social Affairs and Culture, Alexis Tam Chon Weng.

He said the government was considering an amendment to a proposed revision of the city’s smoking legislation. Mr Tam added that the amendment would allow casinos to retain smoking lounges but would impose “stricter standards” on their technical specifications.

The smoking revision bill – as originally drafted – called for smoking to be entirely banned from casino premises. The retention of smoking lounges on casino main floors – provided the right technology was used to suck away the smoke from the lounge entrance areas – was proposed by a majority of members on a Legislative Assembly committee tasked with scrutinising the bill.

“Can these smoking lounges of so-called ‘high-quality’ standards really protect the workers from tobacco harm? We have some doubts regarding that because we still did not see much supporting evidence or studies,” remarked Choi Kam Fu, director general of the Macau Gaming Enterprises Staff’s Association, in comments to GGRAsia. Mr Choi’s labour group is affiliated to the influential Macau Federation of Trade Unions.

“We’re still more inclined to having a full smoke-free work environment, whether it’s for the VIP gaming space or that for mass play – because we think that workers employed in these two segments should receive the same treatment,” Mr Choi remarked to us.

He added; “In this regard, we think that the government should really present more data or authoritative studies showing that setting these ‘high-quality’ smoking lounges inside casinos can protect workers’ health.”

Smoking on casino main floors in Macau is currently only allowed in airport-style enclosed smoking lounges that do not contain any gaming tables or slot machines. Casino operators have been required to get approval for such facilities. Having a cigarette while gambling is at present still permitted in Macau casino VIP rooms.

Mr Choi said his body is yet to conclude what representations it will make on the issue to the three legislators that sit in the Legislative Assembly, on the Macau Federation of Trade Unions’ ticket.

Stephen Lao Ka Weng, president of Power of the Macao Gaming Association, also agreed that the government should present more information regarding the technical standards of any proposed upgraded smoking lounges.

But Mr Lao reiterated that his own group is open to the idea of keeping smoking lounges on the gaming floors of the city’s casinos.

“We don’t oppose against the setting of smoking lounges on casino floors – as long as the related supervision work is properly done,” Mr Lao remarked to us.

But a third activist body – a labour group that refers to itself as Professional for Gaming of New Macau – insisted the best stance was a full smoking ban in the city’s casinos.

“We’re really disappointed by what Mr Tam said [on Thursday]. This is a step backward for the effort to enforce tobacco control,” said Cloee Chao, described as the director of the group.

“With Studio City or Wynn Palace, you can see that the VIP gamblers are asked to smoke at an open space outdoors, instead of a smoking lounge,” she said. “It’s not a difficult thing for the gamblers to comply with. And this is a better move for protecting workers’ health.”

Following Mr Tam’s remarks on Thursday, Ms Chao said her group is going to conduct a survey amongst what it says are its 900 members, to canvass their opinions regarding the enforcement of smoking control inside casinos and the idea of retaining smoking lounges.

Macau’s casino gross gaming revenue (GGR) for the first five days of February is estimated at MOP1.9 billion (US$235.1 million) – or MOP380 million per day – a level that suggests a “45... END_OF_DOCUMENT_TOKEN_TO_BE_REPLACED