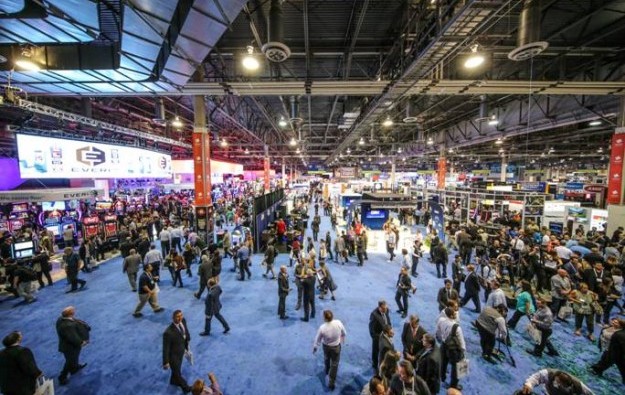 Some of the biggest brand names in the casino technology sector are carrying significant debt after a frenetic two years of mergers and acquisitions – with many of the deals leveraged, several investment analysts have noted.

The gaming suppliers taking part in Wells Fargo’s recent meetings included IGT Plc and Scientific Games Corp. In the past 12 months the two giants been involved in takeover deals aggregating in value to US$11.5-billion.

“Aristocrat had a strong showing [at G2E], and we think the company will continue taking [market] share,” wrote Wells Fargo analysts Cameron McKnight and Robert Shore on Friday, referring to the North American markets.

Aristocrat Technologies announced on Wednesday that it had signed a deal with U.S.-based casino operator Caesars Entertainment Corp for what Aristocrat referred to as a “200-game installation”.

“Scientific Games had a solid breadth of product offerings… [and] IGT’s [product] lineup was an improvement versus prior years,” added the Wells Fargo team in its G2E review.

Scientific Games announced at the start of G2E that it had signed deals for a range of themed slot game products, including some based on the animated series The Simpsons.

IGT announced on September 29 it had signed a deal with Wynn Resorts Ltd – the parent company of Macau casino operator Wynn Macau Ltd – to install “a comprehensive suite of IGT systems applications” at the group’s under-construction Wynn Palace property at Cotai, Macau.

In other commentary on the G2E event, Wells Fargo noted: “Skill-based gaming wasn’t a major focus at the conference.” The brokerage was referring to recent changes in gaming regulations in the state of Nevada that permit skill-based and arcade-like features on slot machines.

Union Gaming Research LLC said in note on Friday – following its own meetings with supplier company executives during G2E – that “challenges persist” for Scientific Games.

They added, regarding Scientific Games’ management: “While we are confident in their ability to achieve merger synergies, we see challenges around unit shipments and the relationship to FCF [free cash flow] and the company’s ability to deleverage in the near term.” Those were references to Scientific Games’ acquisition – via leveraged deals – of several other gaming brands including Bally Technologies Inc. The latter deal closed in November last year.

David Bain, of brokerage Sterne Agee CRT, said in a note on Wednesday that it was reducing its target price respectively for the shares of IGT, Scientific Games and Everi, citing “slightly more negative” short-term outlook for investor sentiment regarding supply firms’ stock, and for third-quarter sales of units.

David Katz and Brian Davis of Telsey Advisory Group said in a Friday memo after their meetings with supply firm executives: “We note that product strength does not necessarily correlate with stock performance, as capital structure and cash flow generation can be more important factors.”

More than 500 people are still inside the Grand Lisboa casino hotel after the complex was locked down on Tuesday by the local authorities, said an official during a Wednesday afternoon briefing on... END_OF_DOCUMENT_TOKEN_TO_BE_REPLACED