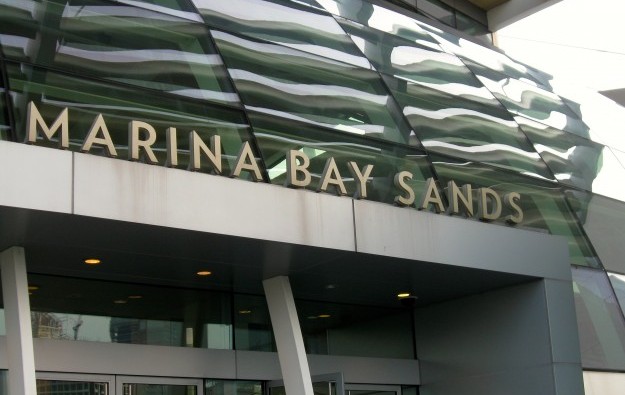 United States-based hospitality company Tao Group opened on Friday in Singapore an outlet called Koma, which it claims is a new style of Japanese restaurant and sushi bar. It is located at the Marina Bay Sands casino resort (pictured) in the city-state.

Koma is the fourth Tao Group establishment at Marina Bay Sands, and the third element of a dining and entertainment complex that the company is running there as part of a deal with the operator of the casino resort, a subsidiary of U.S. gaming company Las Vegas Sands Corp.

Tao Group said Koma had capacity to seat 230 diners. The outlet is said to have an uncommonly large sushi bar and a private dining room on a mezzanine level.

Features of the interior design include a passageway 20-metres (66-feet) in length, between rows of orange arches. It leads arriving diners toward a 2.5-m-high bell. Below the bell is a footbridge said to be in traditional Japanese style, and what the promoters refer to as a “reflecting pool”.

The interior designer is Rockwell Group of the U.S., which has worked on other Tao Group venues.

The group’s facilities at Marina Bay Sands include a branch of the Marquee chain of nightclubs. It opened in April. There is also an Avenue cocktail lounge, which launched in May.

The other establishment the company runs at the casino resort is a branch of the Lavo chain of Italian restaurants, which opened in 2018.

Tao Group runs restaurants and nightspots in many places around the word, including Las Vegas, Nevada in the U.S.