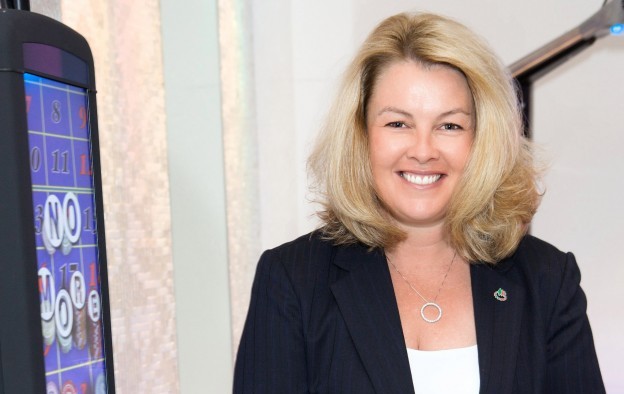 London-based gaming supplier TCS John Huxley wants to expand its footprint in Asia. “We are very Asia-focused,” group chief executive Cath Burns (pictured) says. “It is the centrepiece in the world for table gaming.”

TCS John Huxley is a manufacturer and supplier of products and services for all aspects of casino table gaming. The privately owned company has been in Macau since in 2000.

The firm is currently engaged in a major product installation in Macau, where it already has products in use across the market. Ms Burns did not disclose the name of the client or details about the latest project, but stressed it was part of a long-standing involvement in Asia Pacific markets.

“We have been in Asia for a very long time,” she told GGRAsia on the sidelines of the Global Gaming Expo (G2E) Asia 2014 trade show, which took place in Macau last week. “We are committed to the whole region.”

Jared Mayberry, lead director of product and development, is based in Macau. TCS John Huxley also has an office in Singapore.

Ms Burns explained: “We are very focused in driving products here … That is an important part of our growth and we want to make sure we are in step with the market. Asia is very critical to us.”

Macau offers great potential for the company, as seven new casino-resort venues are scheduled to open in Cotai starting next year. But the market poses some unique challenges. Ms Burns says labour shortages are a big headache for both gaming operators and suppliers, making it hard to find skilled workers.

The overall unemployment rate in Macau stood at 1.7 percent in the first quarter of this year, a number that is perceived as full employment.

“Obviously we have an ongoing business relationship with them,” Mr Burns says. “We are looking forward to the new properties opening over there [in the Philippines] and continuing to grow that market.”

TCS John Huxley expanded its presence in Vietnam last year, supplying 90 gaming tables, 70 displays plus a selection of other products to The Grand Ho Tram Strip, in Vietnam, which opened last July.

Its products are also used by the two casino-resorts in Singapore.

Ms Burns says the live table segment “is obviously the biggest by far” in Asia, in particular in Macau. She hopes that within five years TCS John Huxley will “have got a very nice, dominant position in Asia in the live [gaming] space … just getting bigger and bigger.”

Live dealer gaming tables continue to supply most of the gross gaming revenue in Macau. Official data show slot machines brought in under four percent of the city’s overall casino gross gaming revenue for the first quarter of this year, with a tally of MOP102.2 billion (US$12.8 billion). At the end of March, the city had a total of 5,700 gaming tables and 13,232 slot machines, data from the gaming regulator show.

Under Ms Burns, TCS John Huxley has been placing a strong emphasis on electronic devices for table gaming and on gaming management systems, to supplement its core product lines that include roulette wheels, displays, chippers and gaming tables.

“We have made an investment in that, and that investment is ongoing right now,” she explains.

“What we are doing is building upon the fantastic legacy that we have, which are the utility products. We are adding software-based products over that base, products that collect data out of those devices – and not just out of our devices but out of anyone else’s –, in order to make the operators’ job that much easier, to help them drive their revenues and also their efficiencies.”