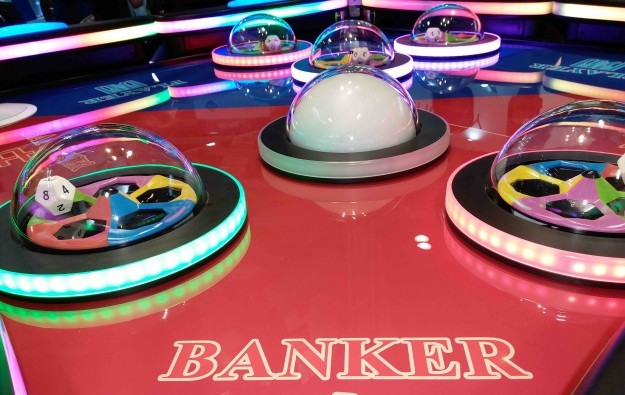 “Gameball” (pictured) is a baccarat game – but using 12-sided dice that are agitated in six ball-like structures – without the use of a dealer.

She added: “It’s their [LVS’s] concept and intellectual property. It’s a spinning device using 12-sided dice so that each side of the dice is a card face.”

Three balls in the machine represent the player’s cards, and three balls those for the banker.

“The results are all read via Bluetooth rather than the camera reading system that is typically used for dice devices,” Ms Kingswell stated.

Within each ball-like structure, are five colour-coded ‘pockets’ in which each dice can land in any one game. Three levels of jackpot prize are available for certain combinations of pocket colour and dice value.

“Later on we will use the Gameball platform for other dice games such as perhaps sic bo,” added Ms Kingswell.

The stock prices of Hong Kong-listed firms directly linked to Macau casino operations rose in Monday trading, following the Saturday announcement that the six incumbent licensees had each been... END_OF_DOCUMENT_TOKEN_TO_BE_REPLACED