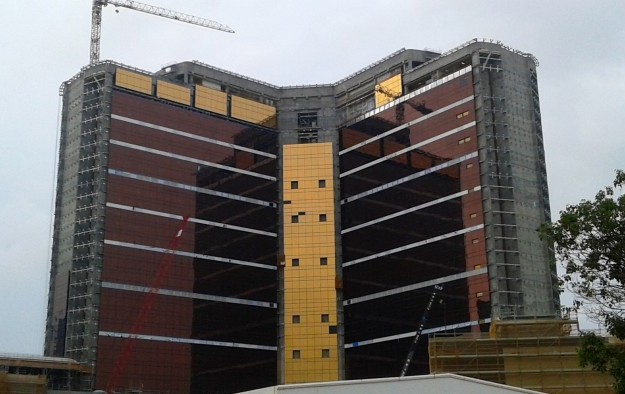 The possibility of policy support from government in relation to the Macau gaming market limits the risk of downward pressure on the shares of Wynn Resorts Ltd, said a note from Telsey Advisory Group LLC on Monday. Wynn Resorts is the parent company of Macau casino operator Wynn Macau Ltd.

“Although the specifics of the support are unknown and they [the authorities] are more likely to support the mass market while VIP remains impaired, the outlook for the Wynn Palace opening is improved,” wrote analysts David Katz and Brian Davis. They were referring to the US$4.1-billion new Cotai resort (pictured) being developed by Wynn Macau and due to open on March 25, 2016.

“Nonetheless, the public statements of support for the Macau economy by the Chinese government liaison [office] warrant a change in view on the shares [of Wynn Resorts] to neutral from negative,” the Telsey team said.

“If we assume that the mass-market table drop is 50 percent higher at the [Wynn] Palace in 2016, the property could generate US$351 million of EBITDA [earnings before interest, taxation, depreciation and amortisation] next year rather than the US$172 million in our forecast,” Mr Katz and Mr Davis said in Monday’s note.

The analysts however said they believe that the city’s economy “remains challenged and VIP [gaming] impaired”.

Telsey said Wynn Macau’s focus on the premium segments of the market, “which are the most challenged at present, suggest the company will have to reposition itself in a challenging environment”.

The analysts added that the opening of Wynn Palace might provide “greater opportunity” for the company to cater to mass customers.

The casino operator “could emerge a more profitable business,” suggested the Telsey analysts. “We believe the VIP business generates EBITDA margins in the 10-percent to 15-percent range, while our impression is that the mass business is more than twice that level. As such, the higher margin levels provide a silver lining to the pressured operating environment,” they added.

The imminent return of package tours from mainland China will not only help boost Macau’s tourism businesses, but is also expected to help casinos gain more foot traffic in their mass gaming... END_OF_DOCUMENT_TOKEN_TO_BE_REPLACED