The maker of modern Macau gaming 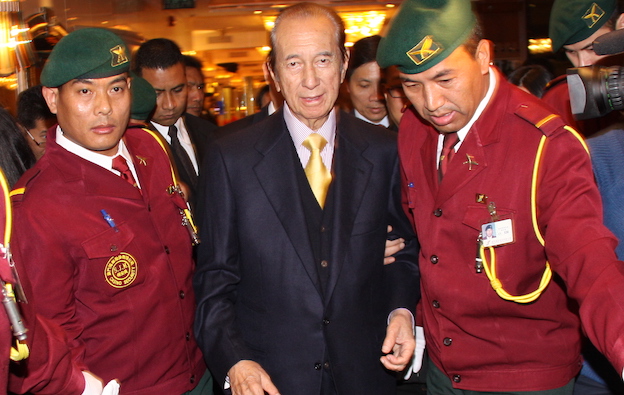 Stanley Ho Hung Sun (pictured), the pioneer of modern Macau gaming, who has died aged 98, casts a long shadow over his own family’s empire and the structure of the whole Macau casino market.

Notwithstanding that Stanley Ho’s family has a strong interest – via Sociedade de Turismo e Diversões de Macao SA, also known as STDM – in the commercial success of Hong Kong-listed SJM Holdings Ltd, there are some question marks about how well the latter company has responded to the competition that has been in the market effectively since 2004 with the opening of Sands Macao, the first property in Macau for United States-based Las Vegas Sands Corp.

In 2002 a monopoly market had been turned officially into an oligopoly: initially of three operators, and then later of six.

SJM Holdings’ market share of Macau casino market gross gaming revenue (GGR) has dwindled annually from a leading 29 percent in 2011 to 13.3 percent in the first quarter of this year, according to company filings.

On a macroeconomic level, much of Macau’s gaming market growth since 2004 is due to mainland China’s opening up, including permission for some of its better-off residents to travel to Macau and beyond, and also the emergence of mass gaming and casino resorts in Macau. But a significant part of the structure of the Macau casino market we know today, with its high-stakes junket play featuring credit risk handled mostly not by the casino operators themselves but by third-party junkets, is substantially the work of Stanley Ho.

Back in the 1980s, the high rollers were mostly from either Hong Kong or Taiwan, according to contemporary media accounts. The junket system Stanley Ho espoused helped to expand Macau gaming – albeit more modestly than today – but it also came back to haunt him when he sought to expand into some other gaming markets, notably Australia.

It has long been hinted – although typically with little in the way of clear-cut evidence being offered – that traditionally an important way of ensuring that players paid back to the junkets, and indirectly the house, the credit extended to them for Macau gambling, was to use the intimidatory power of Chinese criminal organisations known as triads. That perception of the Macau market generally persists in the international media.

Two of the ostensibly outsider brands in the market, post monopoly – Nasdaq-listed Melco Resorts and Entertainment Ltd and Hong Kong-listed MGM China Holdings Ltd – are linked respectively to two of Stanley Ho’s 17 children, aside from the family involvement in SJM Holdings.

Lawrence Ho Yau Lung, chairman of Melco Resorts, entered the market via a sub concession bought for US$900 million from Wynn Resorts Ltd. Pansy Ho Chiu King was instrumental in obtaining from her father – at the price of US$200 million – Macau gaming rights for herself and MGM Resorts International as operating partner. That business is now majority owned by MGM Resorts, although Pansy Ho remains a shareholder in MGM China Holdings, and an executive director and co-chairperson.

Carrying the Ho name has not always proved an advantage, especially among U.S. regulators.

Although Nevada found in 2007 – after hearing personal testimony from Pansy Ho – that she was a suitable person to work as a partner with MGM Resorts, New Jersey was not so understanding, effectively barring the firm from Atlantic City for several years, citing Stanley Ho’s alleged links to Chinese organised crime as justification.

Lawrence Ho’s Melco Resorts was also a target of a regulatory probe in Australia, following the firm acquiring last year a 10-percent stake in Australian casino operator Crown Resorts Ltd. That was due to the fact that Stanley Ho’s name had previously been linked – according to publicly-available information – with local concerns in Australia that the businesses he founded had ties to Chinese organised crime.

Melco Resorts eventually sold the stake in Crown Resorts last month, at a 37.3-percent discount compared to the price it had originally paid. It is unclear if the firm is still a party in any regulatory probe in Australia. The inquiry itself was suspended in early April due to the Covid-19 pandemic.

Stanley Ho’s legacy in terms of his family’s entrenchment in the Macau casino industry also extends to another daughter, Daisy Ho Chiu Fung. She took over as chairman of SJM Holdings after his formal retirement from the business in June 2018.

The late Henry Fok Ying Tung – one of Hong Kong’s richest entrepreneurs – reportedly became a director of STDM after lending US$400,000 to Stanley Ho in 1961 to make up the US$1 million minimum required to bid for the Macau monopoly gambling licence.

Mr Fok sold his 27.7 percent stake the day after the 40-year monopoly expired in 2002, the South China Morning Post newspaper reported at the time. Nonetheless, his son Timothy Fok Tsun Ting remains an SJM Holdings board member and was made in the summer of 2018 – at the time of Stanley Ho’s official retirement from business – a co-chairman of SJM Holdings.

Stanley Ho might be gone, but his family and his network of business partnerships are likely to remain an influence on the Macau casino industry for years to come.

Okada Manila, one of the casino resorts in the Entertainment City zone in the Philippine capital, is offering free Covid-19 vaccination to its employees and what it called “qualified dependents”... END_OF_DOCUMENT_TOKEN_TO_BE_REPLACED