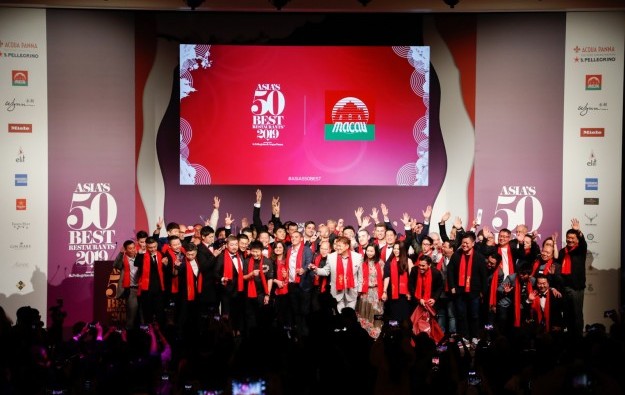 Three restaurants at Asian casino resorts – two in Macau and one in Singapore – have been recognised as among “Asia’s 50 Best Restaurants 2019”. The list honouring some of the best chefs and restaurateurs is the Asian regional version of The World’s 50 Best Restaurants, published by William Reed Business Media.

Jade Dragon, a Cantonese-cuisine establishment at City of Dreams Macau, a property  run by Melco Resorts and Entertainment Ltd, makes its third consecutive appearance on the annual list, and gets the highest ranking of the three, in 27th place. The eatery currently also holds three Michelin stars in the 2019 edition of the “Michelin Guide Hong Kong Macau” launched in December, and is overseen by executive chef Kelvin Au Yeung.

Wing Lei Palace, a Cantonese-cuisine venue inside Wynn Palace, a Macau resort in the Cotai district, and run by Wynn Macau Ltd, was ranked 36th in the Asia’s 50 Best Restaurants 2019 list. The dining establishment’s head chef is Tam Kwok Fung, who previously worked at Jade Dragon.

Waku Ghin, described as a modern-Japanese establishment, based at Marina Bay Sands, a Singapore casino resort operated by Las Vegas Sands Corp, was placed 40th on the list. The eatery is led by executive chef Masahiko Inoue and chef-proprietor Tetsuya Wakuda.

According to the list’s promoter, the rankings were decided by a 300-plus member committee consisting of food writers, chefs, restaurateurs and gourmets from across the region.

The awards presentation ceremony (pictured) for Asia’s 50 Best Restaurants 2019 was held at Wynn Palace on Tuesday. Macau’s Secretary for Social Affairs and Culture, Alexis Tam Chon Weng, and the director of the Macao Government Tourism Office, Maria Helena de Senna Fernandes, were among the attendees. It is the second time the award ceremony has taken place in Macau,

“Achieving this level of recognition for the third year running is of tremendous significance, further reaffirming international recognition for the team’s efforts. As ever, we are committed to raising the bar even higher,” said the chairman and chief executive of Melco Resorts, Lawrence Ho Yau Lung, in prepared remarks carried in the release.

Wynn Macau Ltd said in a press release on Wednesday regarding its own 2019 awardee: “Wing Lei Palace is renowned for serving authentic Cantonese dishes with an innovative flair.”

The Asia’s 50 Best Restaurants list was launched in 2013. In the first four years of the awards, Macau had a single restaurant in the rankings: Robuchon au Dôme, at casino hotel Grand Lisboa, a resort operated by SJM Holdings Ltd.

In 2017, two additional Macau casino-resort restaurants – apart from Robuchon au Dôme – made the list: Jade Dragon and The Tasting Room, both at City of Dreams Macau. In 2018′s list, Jade Dragon was the sole awardee for the Macau casino sector.

Casino operator Melco Resorts and Entertainment Ltd announced on Thursday that it would launch at the end of June a new, themed zone for “family-friendly” entertainment at its majority-owned... END_OF_DOCUMENT_TOKEN_TO_BE_REPLACED