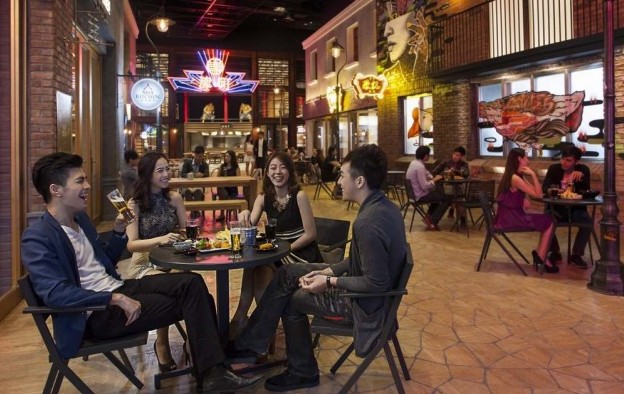 Three restaurants among a number previously closed at casino resort City of Dreams (CoD) Macau by the Macau government – due to lack of necessary licensing – have “reopened”, the property’s operator Melco Resorts and Entertainment Ltd told GGRAsia.

“Regarding Soho, the three restaurants reopened in the last couple of days as they have obtained relevant licences,” said a statement from Melco Resorts – issued through public relations company Brunswick Group LLP – sent on Thursday evening to GGRAsia and referring to outlets in a zone of eateries and cafes on level two of City of Dreams Macau.

Macau public broadcaster Radio Macau had earlier reported that nine previously-shuttered venues were due to reopen at Soho (pictured in a file photo). The report added that three restaurants had yet to receive the relevant licensing permits to reopen.

That was understood to be a reference to, respectively, Gold Coast Oyster and Seafood Restaurant; Shelter Italian Bar and Restaurant; and T for Tapas, as they were known at the time of their closure. The reference to the “Melco self-operating outlet” is understood to relate to that eatery being part of City of Dreams Macau’s own operations, rather than an outlet leased out and managed by a third party.

The statement did not clarify how many shuttered eateries were still to reopen.

It emerged in June that – despite the Soho zone having opened to the public in 2014 – some restaurants launched since the zone’s inauguration had not been operating with the necessary licensing. Government enforcement action against the affected restaurants took place on various dates between 2016 and this year, but only became public this summer. A total of 13 outlets was investigated, according to previous media reports.

Licensing of Macau restaurants is the responsibility of Macao Government Tourism Office, known as MGTO. GGRAsia emailed the tourism bureau asking for comment on the Soho restaurant reopenings, but had not received a reply by the time this story went online.

Macau’s casino gross gaming revenue (GGR) for the first five days of February is estimated at MOP1.9 billion (US$235.1 million) – or MOP380 million per day – a level that suggests a “45... END_OF_DOCUMENT_TOKEN_TO_BE_REPLACED