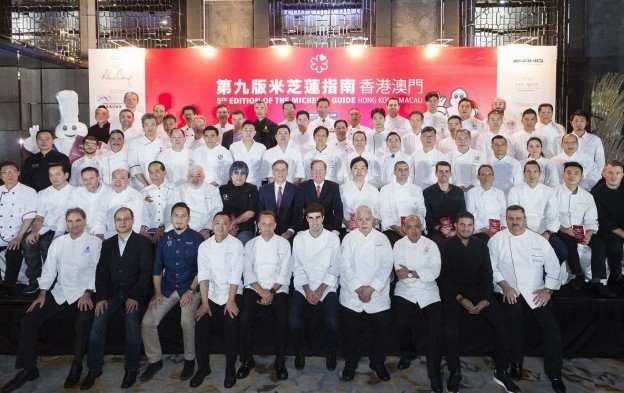 Two Macau restaurants based at casino resorts in the city have been newly-awarded two stars in the “Michelin Guide Hong Kong Macau 2017” released on Wednesday.

An additional 12 Macau restaurants have been awarded or have maintained a one-star rating. Two of them are first-time recipients, and a further restaurant regained the single star it first won in the inaugural 2009 edition of the guide but lost in 2010.

That means a total of 19 Macau restaurants have star ratings in the latest guide: all but one of them are in the city’s casino resorts. The outlier is King, a Cantonese-style establishment in the AIA Tower in downtown Macau, which keep its one-star rating.

The Macau establishments newly-awarded two Michelin stars – venues that each had a single star in the 2016 edition – are: Mizumi, a restaurant specialising in Japanese cuisine, at Wynn Macau Ltd’s Wynn Macau resort on the city’s peninsula; and Feng Wei Ju, a Sichuan-style Chinese restaurant at Galaxy Entertainment Group Ltd’s StarWorld Macau, also downtown.

Golden Flower, a Chinese restaurant at Wynn Macau, has maintained its two-star rating. So has Cantonese restaurant Jade Dragon at Melco Crown Entertainment Ltd’s City of Dreams resort; and The Tasting Room, a French contemporary restaurant at the same venue.

The Italian cuisine venue 8 ½ Otto e Mezzo Bombana, at Galaxy Macau, keeps its one star, as does Shinji, a Japanese sushi restaurant at City of Dreams.

Terrazza, an Italian cuisine establishment at Galaxy Macau; The Golden Peacock, an Indian cuisine restaurant at Sands China Ltd’s Venetian Macao; and The Kitchen, a steakhouse at the Grand Lisboa Hotel, all maintain their one-star standing.

MGM China Holdings Ltd, operator currently of a single venue, MGM Macau, is the only one of Macau’s six casino operators presently without a Michelin-starred eatery.

In the latest guide, a further 12 Macau restaurants are listed in the Bib Gourmand section, and an additional 12 Macau outlets are featured in the Street Food category.

Melco Crown is a partner of the “Michelin Guide Hong Kong Macau 2017”.

The long-awaited new outdoor theme park at Resorts World Genting, Malaysia’s only casino resort, is impressive, but likely to be “loss-generating due to heavy depreciation”, says a Thursday... END_OF_DOCUMENT_TOKEN_TO_BE_REPLACED