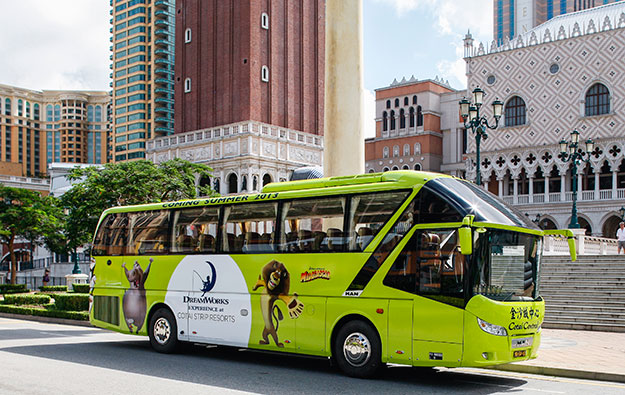 The news was given in a joint press release issued by Galaxy Entertainment on Saturday.

In April, Sands China Ltd, the parent of Venetian Macau Ltd; and Galaxy Entertainment; had told GGRAsia that they did not plan to introduce restrictions – to the usage by guests – of their individually-operated free shuttle bus services (pictured in a file photo).

The city’s Transport Bureau had said in early March – in a written reply to questions from GGRAsia – that 11 casino shuttle bus routes in Macau had been cut as of that date and 10 routes had been “optimised,” as part of a move to reduce the number of such buses on the city’s roads by 20 percent.

Saturday’s press release from the three casino firms sharing the Cotai Connection service said the shuttle bus service would “facilitate the transport of visitors around the Cotai Strip.”

Saturday’s statement by the three operators said Cotai Connection would run from 11.30am to 10.30pm daily with 15- to 20-minute travel intervals between stops.

The statement said: “Both the east and west route will stop at Galaxy Macau, Broadway Macau, Studio City, City of Dreams, the Venetian Macao and Sands Cotai Central.”

In April GGRAsia learned that at least two Macau casino operators had changed their rules on the provision of free shuttle bus services to visitors. MGM China Holdings Ltd and Wynn Macau Ltd do not currently have Cotai properties open, but shuttle customers to and from their single Macau peninsula properties.

The two firms respectively introduced a system requiring passengers to present a casino loyalty programme membership card or a receipt of purchase, in order to be allowed on board the free shuttle buses departing from their respective properties.

A number of investment analysts have mentioned the importance of high-quality transport links in building a mass-market audience for Cotai’s new casino resorts.

Macau’s new Pac On ferry terminal – located near the airport on Taipa Island and designed to bring mass-market tourists direct to the nearby Cotai resorts – will start operations only at the “beginning” of 2017 at best, Macau’s Infrastructure Development Office told GGRAsia in early May.