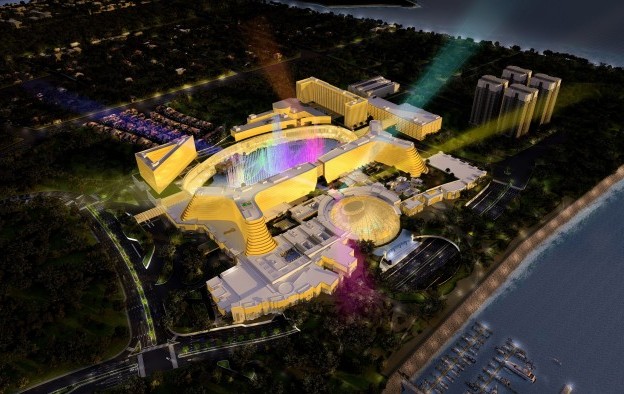 Tiger Resort, Leisure and Entertainment Inc has confirmed to GGRAsia by email that it has been given a construction timetable extension for its Manila Bay Resorts casino venue (pictured in a rendering) and that the “projected opening of the property will be December 2016”.

The firm had also said in its release: “There will also be 15,000 sq metres of additional guest rooms, [and] 30,000 sq metres of additional parking space to accommodate 1,000 more cars,” adding that the venue’s “adjustments” would also include “enhanced water and electrical system design and the improvement of both structural and architectural designs of the project”.

Asked on Thursday whether the additions were a condition imposed by Pagcor in return for a timetable extension, the company said: “The expansion was the reason why we requested for a new project implementation plan, which Pagcor approved today.”

Tiger Resort added in its email to GGRAsia: “The original commitment was two hotel towers. A part of the additional scope (97,000 sq metres gross floor area) are further enhancements including a sky bridge that will connect the two towers.”

The firm added: “We are still committed, as referenced in our press release shared July 30, 2015, to employ 8,000 people, 95 percent of which are Filipinos.”

It had been reported in mid-September by Philippines media outlets that Pagcor’s board of directors had given official approval to shift an original timetable and push back the completion of Manila Bay Resorts to December 31, 2016, after Tiger Resort missed an earlier March 31, 2015 deadline.

In mid-September Reuters cited Pagcor’s Francis Hernando, vice president for gaming licensing and development, as indicating Tiger Resort needed to set aside a new PHP100 million (US$2.14 million) guarantee fee, improve its corporate governance and submit a bank guarantee that it could financially support the project.

The firm announced in July a new local partner – All Seasons Hotel and Resort Corp – for the casino scheme, another condition it had to fulfil in order for the project to move forward.

In May, Tiger Resort said it had already committed approximately US$750 million to the Manila Bay Resorts project, with a further US$1 billion pending.

When it opens, Manila Bay Resorts will have a 30,000-sq-metres casino housing up to 500 table games and 3,000 slot machines, Matt Hurst, an executive vice president at Tiger Resort, said in July.