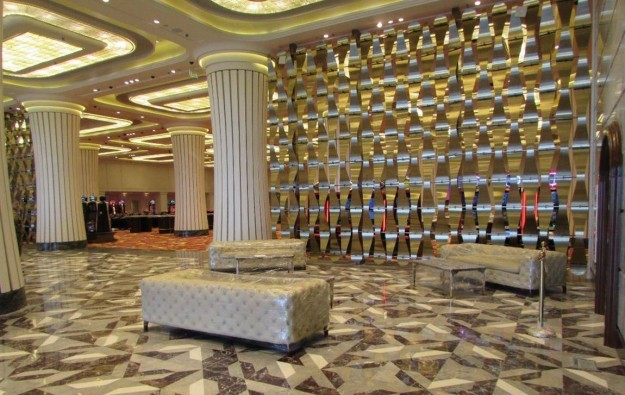 When gaming entrepreneur Lawrence Ho Yau Lung announced in 2013 plans for a casino resort in the Russian Far East, the news was met with scepticism in some quarters. Some industry observers remembered that in 2009 the Russian government had closed down the casinos and gaming machine parlours then existing in the Russian Federation, restricting gambling to four remote special zones.

While gross gaming revenue (GGR) from Chinese players visiting Macau has declined by more than a third this year, demand from players in South Korea – a country a short flight from the Russian Far East – has been growing.

“A few years back people would have said: ‘Why would you diversify from Macau?’ Obviously Lawrence is very committed to Macau with the Studio City project and the other stuff he has going there. But it wasn’t a bad idea to diversify a little bit,” said Eric Landheer, director of corporate finance and strategy at Hong Kong-listed Summit Ascent Holdings Ltd, the majority investor in the Russian project, in an interview with GGRAsia.

Summit Ascent is controlled by Mr Ho, who is also co-chairman and chief executive of Studio City’s majority shareholder Melco Crown Entertainment Ltd. Other than that, the two firms are “unrelated”, Mr Landheer told GGRAsia.

GGR in Macau declined by 37 percent in the six months to June 30. Kangwon Land, the only land-based casino in South Korea authorised to serve that country’s citizens, saw sales revenue grow by 9.3 percent in the second quarter this year.

Most investment analysts believe a significant portion of the Macau decline is due to mainland China’s politics, with an anti-graft drive and increased vigilance by the authorities on currency flows. Analysts also note that the slowing in China’s economy and the slump in mainland equities markets has played a role in recent softness in demand for Macau gambling.

South Korean players are a key target for Tigre de Cristal (pictured) – as Mr Ho’s Russian casino resort is known – but they are not the only one. “Where we sit, we’re next to Japan, which has no gambling legislation passed so far,” explained Mr Landheer.

He added: “You’ve got [South] Korea talking about setting up a bunch of different types of [casino] resorts, but in reality they are ‘foreigner-only’ resorts – and they are entirely predicated on Chinese customers. We are in a different situation. We can welcome Koreans, we can welcome the Japanese, we can welcome the northeast Chinese, and we have our local [Russian customer] base as well.”

Accessibility is also important to the project, as well as proximity, Summit Ascent says.

Mr Landheer noted: “A visa regime is already in place that allows Chinese customers – travelling in any tour group of five or more – visa exempt access or visitation to Russia for 15 days. For the [South] Koreans it’s 60 days visa-free.”

Summit Ascent suggests that customers coming from Seoul, the capital of South Korea, could travel by air to Tigre de Cristal in little more time than it would take them to reach Kangwon Land by road.

“There are more than 21 flights per week from Incheon International Airport to Vladivostok. Incheon is one of the major hubs for people travelling in and out of the Russian Far East… For a direct flight from Korea on a Russian airline you are talking about one hour and 50 minutes [in travel time],” noted Mr Landheer.

He added: “Kangwon Land takes about four hours to drive to from Seoul. In addition to that, the mass customer generally has a very long waiting time [for a gaming seat] even after they actually arrive.”

The Primorye IEZ, in the Primorsky Krai region, is only 15 kilometres (9.3 miles) from Vladivostok International Airport.

“We think it’s an exciting location simply because of the geography – smack dab in the middle of more than 300 million Asians that are within a two-and-a-half to three-hour flight radius – including 130 million Chinese in Northern China,” stated Mr Landheer.

Primorsky Krai shares a border not only with China but also with North Korea. The latter country is subject to a range of international sanctions, as well as being on several international warning lists regarding money-laundering activities.

GGRAsia asked Mr Landheer if his company was concerned the North Korea regime might attempt to launder money via the company’s casino in order to gain better access to cross-border sources of finance.

He replied: “We have no plans to target North Korean customers. There is a casino in North Korea. And the bulk of the customers that go to that place are not Korean – or North Korean.”

We additionally asked whether there was concern that Western sanctions on the Russian leadership and economy – resulting from the country’s annexation in March 2014 of the Crimea peninsula from neighbouring Ukraine – might have a negative impact on business at Russian casinos.

Mr Landheer stated: “Obviously if some kind of foreign currency controls were put in place, this would create new challenges for us, but it would not be something that would be insurmountable.”

Tigre de Cristal is the first to market of four casino resorts authorised for the Primorye IEZ. Tigre de Cristal will have a soft opening on October 8, followed by an official one in “late October”, Summit Ascent said in a filing in late August.

The scheme is smaller in scale than the new Cotai resorts in Macau. The first phase of Tigre de Cristal has a capital budget of US$172 million and there is a commitment by Mr Ho and his partners to spend “up to” US$700 million in total, including a second phase currently scheduled to open in 2018. The “all in” cost of Studio City in Macau, due to have a first phase opening on October 27, is US$3.2 billion.

Mr Landheer says the company believes that in its own way Tigre de Cristal will be as groundbreaking for the Russian Far East as Macau’s new generation of casino resorts have been for that city.

“You have a hotel that we believe will be the finest hotel in the entire Russian Far East. By Hong Kong standards you are looking at… a four-star hotel. In terms of quality, on a comparative basis you can look at a lot of the properties that are in Macau, obviously on a much smaller scale,” he explained.

“There’s a poker zone on a lower level. Then on the main gaming floor we have the bulk of the machines, the bulk of the tables. Level one, if you will, is where we would have the VIP rooms, the rest of the gaming and the bulk of the food and beverage,” stated Mr Landheer.

The gaming in phase one will have 42 mass-market tables, 25 VIP tables, and 769 slot machines and electronic table games. The bulk of the electronic product will be slot machines, added the executive.

“There are no other gaming taxes,” said Mr Landheer. “We believe this works out to an effective gaming tax rate of under 1 percent, and should enable us to incentivise our VIP and mass players while maintaining relatively high margins,” explained the executive.

“We are also exempt from tax on non-gaming revenue until 2020.”

Summit Ascent believes timing is also in its favour.

“Sino-Russian relations are better than they have ever been,” said Mr Landheer.

According to the official website of the Primorksy Krai Development Corporation – which is overseeing development of the Primorye IEZ – four licences have so far been granted for casino resorts in the zone.

GGRAsia asked Mr Landheer whether Summit Ascent was concerned that too many licences had been issued too quickly for an as yet unproven casino destination, and might risk cannibalising the market.

“I’m not concerned about that. You are talking about the very distant future before these other resorts are built out,” he told us.

“We expect to have a virtual monopoly – in gaming, in that area – for potentially up to three years or even longer.”

The Primorye gaming zone was established under a Russian Federation government decree in August 2009. According to the development corporation’s website, the total area of ​​the gaming zone is 619 hectares (1,530 acres), with 263 hectares allocated for resort development.

Of the three other licences agreed with the local authorities, the second resort announced was ‘Naga Entertainment City’ from Hong Kong-listed NagaCorp Ltd, which currently has its main casino operation in the Cambodian capital Phnom Penh.

According to the local development corporation, Naga Entertainment City will be divided into three stages. A foundation stone was laid in May. Work on the first stage is due to start in the second quarter of 2016, with the “entertainment complex” ready to accept guests in the third quarter of 2018. All three stages are due to be completed by 2021 with a total investment in the project of “at least” US$350 million.

Naga Entertainment City will have design input from U.S. architect Paul Steelman, whose practice Steelman Partners has been involved in many gaming projects in Asia. When completed, it is supposed to have 2,786 rooms and a 2,000-seat concert hall.

On February 5 this year, the Primorye IEZ managers also signed a deal with a unit of Russian developer Royal Time LLC, for an integrated resort with the working title ‘Phoenix’. The multi-stage development will have hotels in the three-, four- and five-star category, “conceptual design” from Steelman Partners, and an investment of “no less than” US$215 million on a concession area of 151,901 square metres.

On March 24 this year, Primorye IEZ announced the signing of a deal with Diamond Fortune Holdings Ltd – a firm managed by a group of “Russian and Asian investors, professionals in the gambling business and international finance management,” for the construction of a casino resort with hotels, casinos, entertainment and shopping facilities, and with design input from Steelman Partners.

The “expected” investment will be “at least” US$913.7 million. The total area of Diamond Fortune’s land holding at the IEZ is 769,053 sq m, according to the local development corporation. The property’s first stage should open by August 2019.

The distinctive name of Summit Ascent’s Russian resort can be explained by two things: climate and tradition.

‘Tigre’ or ‘tiger’ in the resort name relates to the fact that the Siberian tiger is indigenous to the Primorsky Krai region where the resort is located, and appears prominently on the region’s coat of arms and its flag.

Phase two of Tigre de Cristal will add: 500 rooms across two hotels (one four-star and one five-star); a further 500 slot machines; a further 100 VIP tables; 70 mass-market gaming tables; a shopping mall with – potentially – duty-free; food and beverage outlets; a spa centre; a nightclub; and conference and auditorium facilities. The phase two complex will be three times the size of phase one.

“Our current estimated capex [capital expenditure] for our phase two – which we expect to open some time in 2018 – is approximately US$500 million. But we will evaluate whether that’s sufficient or whether or not we want to do more than that, based on the business and cash flows we have coming in for phase one,” said Mr Landheer.

Asked by GGRAsia if Summit Ascent intended to float shares in Tigre de Cristal in a separate listing, the executive told us: “There are no plans to.”

He added the company had a memorandum of understanding with China Construction (Russia) Co Ltd – a wholly-owned subsidiary of China State Engineering Corp Ltd – that was the main contractor on phase one, to build phase two and help arrange financing for it.

“We think our project is in a good position to assist in economic development and in the growth of tourism, and we are very excited about it,” said Mr Landheer.

Some Macau casinos visited by GGRAsia on Thursday, actually had tables that were closed, notwithstanding strong consumer demand during Chinese New Year (CNY). The reasons for some tables being... END_OF_DOCUMENT_TOKEN_TO_BE_REPLACED