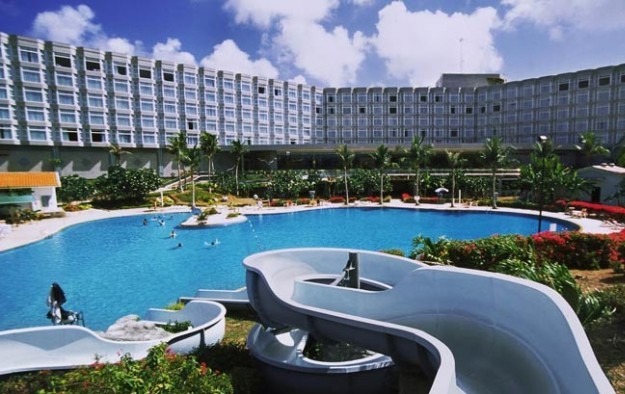 A Facebook social media page that links to the official website of a senior Tinian official says that Tinian Dynasty Hotel and Casino (pictured), situated on a U.S. Pacific territory, has “temporarily” closed its casino operation with effect from Friday.

Tinian’s Mayor, JP San Nicolas said in the statement posted on Facebook that the reason for the closure was the ongoing disruption to local air passenger services caused by Typhoon Soudelor, which struck the Commonwealth of the Northern Mariana Islands (CNMI) – a U.S. territory of which Tinian is part – on August 2. The tropical storm was said by meteorologists to be the strongest to hit CNMI in nearly 30 years.

A company called Hong Kong Entertainment (Overseas) Investments Ltd – said to be trading as Tinian Dynasty Hotel and Casino – was in June ordered to pay a record US$75 million civil penalty by U.S. federal authorities for allegedly violating that country’s anti-money-laundering rules.

The Tinian Mayor’s statement issued on Sunday said: “In a meeting with representatives from Hong Kong Entertainment and Spectrum Gaming, HKE’s casino operation consultants, it was confirmed to Tinian Mayor JP San Nicolas that Tinian Dynasty was closing its casino operation floor temporarily starting on Friday afternoon. This decision stems from the inability of tour operators to sell its two-island destination tour package, which includes Tinian and Saipan, as a result of Typhoon Soudelor’s recent devastation of the CNMI. Charter flights are currently unable to land on Saipan during its scheduled night arrivals due to the airport’s limited day time only operational hours.”

In late July it was additionally reported that Tinian Dynasty had also agreed to forfeit US$3.04 million as part of a non-prosecution agreement made with the U.S. Department of Justice.

The non-prosecution agreement required the Pacific island casino property to cooperate with the United States in continuing criminal investigations and to overhaul its anti-money-laundering compliance procedures.

The Tinian Mayor’s statement on Sunday also mentioned that more than a month earlier, the Tinian Casino Gaming Control Commission (TCGCC) had entered into a memorandum of understanding with what the memo referred to as “HKE” and an entity called Tinian Entertainment Co “for the purposes of transferring ownership and operational control of HKE to TEC”.

The statement quoted the Mayor saying he was confident “TCGCC and HKE will work cooperatively toward the goal of reopening the casino operations and in the interim, execute a temporary closure plan that will maintain the integrity of the industry in the interim.”