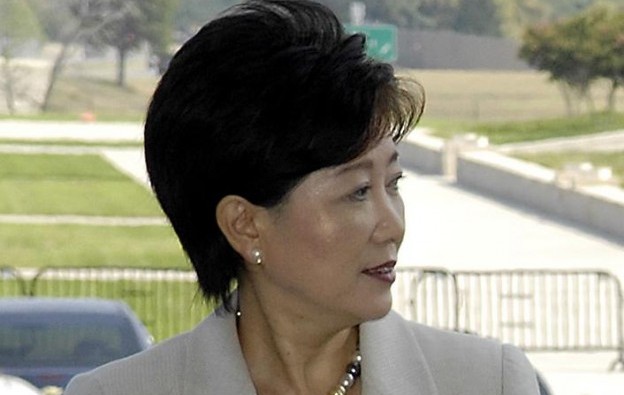 Tokyo is to “keep considering whether to apply” for the right to host a casino complex or integrated resort (IR) as such schemes are known in Japan, taking into the consideration the “foundation policy” of the country’s government on the issue, says Yuriko Koike (pictured in a file photo), governor of the national capital.

Her comments came following the confirmation on Friday of the national basic policy on IRs, according to information collated by GGRAsia’s Japan correspondent.

In October, a number of commentators on Japan’s casino liberalisation process had told GGRAsia that Tokyo – which has not yet declared its position on a possible IR, but is due to host in 2021 the summer Olympics postponed from this year due to the Covid-19 pandemic – remained a place to watch as it would be a highly-coveted location for a casino resort.

Up to three such venues will be permitted nationally in a first phase of liberalisation.

Friday’s announcement by the country’s government regarding the national basic policy also confirmed the central authorities would start accepting local-government submissions for the right to host a resort from October 1, 2021, with a closing date of April 28, 2022, i.e., about a nine-month delay from a previously-announced timetable.

Other reactions to the national basic policy have also come via statements from leaders in other cities and prefectures.

“Osaka will finish fixing its IR implementation policy in January 2021 and choose an operator during summer and autumn, 2021,” said the statement, reiterating that currently a unit of United States-based MGM Resorts International and Japan’s Orix Corp were in combination currently the sole qualified bidder in Osaka.

The Osaka leaders’ statement added that they considered currently the “timing of the full opening as flexible,” in relation to a local resort.

The national basic policy foresees such venues opening only in the “late 2020s”, due to factors including time needed for environmental assessment, and for construction.

In November, Wakayama said it had pushed back by almost three months its deadline for request-for-proposal (RFP) submissions from private-sector, would-be partners for its tilt at having a casino resort.

Such Wakayama RFP submissions must now be made by January 15 next year, versus the earlier deadline of October 19 this year, according to information collated by GGRAsia’s Japan correspondent.

Any interested local authorities must first choose a private-sector partner before applying to the national government for the right to host a casino resort.