Tony Fung not walking away from Aquis project 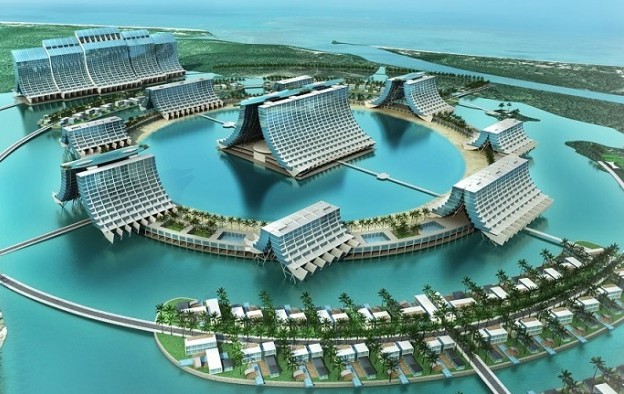 Hong Kong businessman Tony Fung Wing Cheung has admitted in an open letter on Thursday to the people of Cairns, Queensland, that his dream of building a massive casino resort in the northeast Australia coastal community is facing “increasing complexity and difficulty” in the approvals process.

Mr Fung says he is willing to marshal investment amounting to AUD8.15 billion (US$7 billion) to create Aquis Great Barrier Reef Resort (pictured in a rendering) and help feed Chinese high roller gamblers to play in the casino proposed for the site; bringing in much needed tax for Queensland. According to the state budget for 2014-15, Queensland’s public debt stands at AUD80 billion, with AUD4 billion in annual interest payments.

But on Monday Mr Fung issued a statement saying that the future of the Aquis project was under “review” after it became clear his self-imposed November 28 deadline to take over the small existing casino in Cairns – Reef Hotel Casino – could not be met.

Queensland Office of Liquor and Gaming Regulation had advised it would not be able to grant all gaming regulatory approvals to the deal by then.

On Thursday in his emailed letter to the Cairns community, Mr Fung stressed he was not walking away.

“Despite the challenges of recent weeks I wanted to put on the record my continued personal commitment to the development of Aquis and my thanks for the overwhelming support for the project,” he wrote.

But Mr Fung suggested the failure of the Reef Hotel Casino takeover bid might require changes to the Aquis scheme.

“The failure of the offer will…require a comprehensive review of our strategy for Aquis and may require some difficult decisions about the project. While undertaking the review we will continue to push forward with a number of regulatory hurdles including finalising our environmental impact statement,” said Mr Fung.

He added, referring to the area where the resort is due to be located: “We recently signed an extension of our option over the core site at Yorkeys Knob. The extension reflects our commitment to push ahead with Aquis but also acknowledges the increasing complexity and difficulty of the approvals process and the fact we may need some more time than first anticipated.”

His comments come at a time of growing debate in Australia about whether industrial and commercial development in Queensland threatens the future of the Great Barrier Reef – the huge underwater coral reef that stretches much of the length of Queensland’s coast, and which is mentioned in the planned resort’s title.

The Aquis project’s supporters claim it could directly create 10,000 new jobs in Cairns, which has a population of 160,000 and an economy largely reliant on tourism. They add that the project’s casino – designed to attract VIP and mass-market players from China and elsewhere in Asia – could bring in AUD900 million tax revenue annually for the Queensland government.

An entity called Aquis Resort at The Great Barrier Reef Pty Ltd – the proponent of the plan – is wholly and solely owned by Mr Fung, a Hong Kong resident and “long term investor in Queensland”, according to a submission the developer made to the state government in July 2013.

It is likely that Macau will shortly have a third round of citywide centre-based Covid-19 testing in little more than a week, after the results so far of a second mass test – that was due to finish... END_OF_DOCUMENT_TOKEN_TO_BE_REPLACED