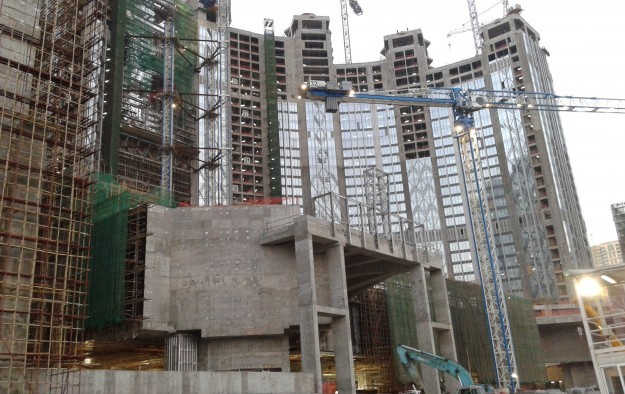 “A weaker operating environment will make it more challenging for Studio City Finance to ramp up its Studio City project [pictured], which is scheduled to open in mid-2015, and to realise its revenue growth and de-leveraging plan in the next one to two years,” said Moody’s in a note issued in Hong Kong on Tuesday.

Last year Melco Crown parent said that it was increasing the budget for Studio City by 15 percent, to US$2.3 billion.

“Nevertheless, MCE Finance’s established operations and strong financial profile will buffer it from a slowing market,” added the analyst.

MCE Finance had cash and deposits of around US$1.3 billion and undrawn banking facilities of US$401 million as of September 30, said Moody’s. That fully covers the firm’s capital expenditure commitments of US$400 million to US$500 million – as estimated by the ratings agency – as well as debt repayments of US$257 million for the coming 12 months.

Macau’s casino regulator, the Gaming Inspection and Coordination Bureau, on January 2 reported that Macau’s gross gaming revenue (GGR) for 2014 fell 2.6 percent year-on-year to MOP351.52 billion (US$44.0 billion). It was the first annual contraction in GGR since records began in their current form in 2005.

The imminent return of package tours from mainland China will not only help boost Macau’s tourism businesses, but is also expected to help casinos gain more foot traffic in their mass gaming... END_OF_DOCUMENT_TOKEN_TO_BE_REPLACED