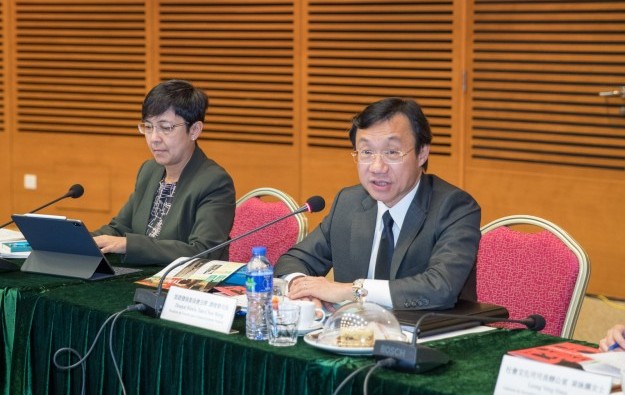 The idea of a tourist tax in Macau was to tackle issues relating to the city’s tourism capacity, said on Wednesday a senior government official, indirectly quoted in a Macau government press-release account of a closed-doors meeting discussing the topic.

None of the commentary attributed to the official - Macau’s Secretary for Social Affairs and Culture, Alexis Tam Chon Weng (pictured right) – was in the form of direct quotes. He was said to have made his comments during a plenary meeting of the city’s Tourism Development Committee. The press release did not mention why the introduction of such a tax might have an impact on “tourism capacity”. Nor did the release suggest that there were too many tourists in Macau.

The document did mention however that the meeting discussed the idea of an “appointment system” for people wishing to visit certain tourist attractions, “for management of the daily volume of visitor admissions”.

Tiny Macau is on course for more than 38 million tourists this year, according to the local tourism bureau. The city had more than 35.8 million last year. To put those numbers in perspective, the whole of Japan received only 31.2 million visitors in 2018, according to the Japan National Tourism Organization.

A Macau study published in 2015 found that – as of 2014 – the optimum tourist “carrying capacity” of Macau stood between 32.6 million and 33.7 million visitors. Since then, infrastructure improvements have been made, including to the border crossing facilities from mainland China, at Gongbei and the Lotus Bridge.

The Macao Government Tourism Office (MGTO) said last week it had launched a survey on the potential introduction of a tourist tax to the city. The method by which such a tax might be collected, and how much it might be, have not so far been mentioned by officials.

Mr Tam stressed in his Wednesday remarks that the local government was looking into alternative solutions to a tax. The aim was for “striking a balance between the quality of residents’ lives and tourism industry development,” said the press release.

During the meeting, some of the committee members were said to have expressed concerns about the idea of introducing a tourist tax and its potential impact, according to the government press release.

The statement also cited Mr Tam referring to a “continuous surge in visitor arrivals” and the challenges it posed to Macau. But the official was also said to have mentioned the government remained “open” to opinions on the subject of introducing tourist tax to Macau.

MGTO – its head Maria Helena de Senna Fernandes (pictured left) also attended the Wednesday meeting – has launched an online poll surveying public opinion on the potential introduction of a tourist tax to the city. The survey began on May 20 and runs until June 20, inclusive. MGTO has also stated that it has distributed separate questionnaires on the tourist tax topic to entities in Macau’s travel industry.

The liquidity of casino group Las Vegas Sands Corp is “strong”, with over US$6.4 billion of consolidated cash and nearly US$3.5 billion of undrawn revolving credit facility capacity, said a... END_OF_DOCUMENT_TOKEN_TO_BE_REPLACED