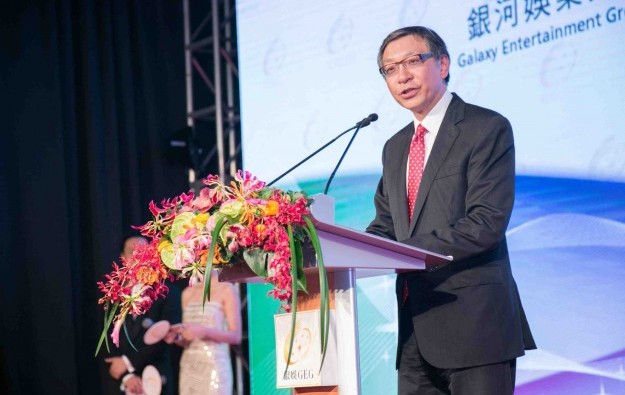 “There might be some impact in the run-up to the [U.S.] mid-term elections in November,” Francis Lui (pictured in a file photo) told us.

Investors and consumers are likely to be watching for any sign that President Donald Trump’s policy mandate might be weakening if he loses control of either or both houses of the U.S. Congress.

Francis Lui was speaking when asked to comment on the tone of a Monday note from JP Morgan Securities Asia Ltd. It suggested that in Macau “VIP trends have softened incrementally” and that the overall tone of the brokerage’s junket contacts was “getting more cautious (even versus few weeks ago), with most citing weakening ‘gambler confidence’ amid macro uncertainty”.

But Francis Lui noted, referring to the Macau market: “In any case, I think it is unreasonable to expect 20 percent year-on-year growth in gaming revenue.”

His comments came on the sidelines of a dinner in Hong Kong on Wednesday honouring the recipients of awards for the third annual edition of the “Lui Che Woo Prize – Prize for World Civilisation”, founded by his father, the chairman of Galaxy Entertainment.

At the time the prize fund was formally announced in September 2015, it was reported it had available a total of HKD60 million (US$7.7 million) annually in prize money, and sought “to honour achievements which make the world a better and more sustainable place”.

This year’s honourees were: Pratham Education Foundation, receiving the “Positive Energy Prize”; the World Meteorological Organization, winning the “Welfare Betterment Prize”; and Hans-Josef Fell, who was awarded the “Sustainability Prize”.

Pratham Education Foundation is described as one of the largest non-government organisations in India, annually helping one million children attain basic literacy and numeracy.

The World Meteorological Organization’s prize was for its work on improving monitoring, forecasting and communication between its 191-strong membership roster of jurisdictions in order to mitigate the impact of natural disasters.

The subject is topical in Macau, where many of the casino resorts are built on ground close to sea level. Macau has experienced two Typhoon Signal No. 10 storms – the highest possible category for measuring such weather events – and that brought extensive flooding, in just over 12 months.

During the latest major storm, Typhoon Mangkhut, last month, the city authorities imposed a precautionary closure of all casinos. A year earlier, Typhoon Hato caused some superficial structural damage to some casino resorts and also saw temporary closure of several, mostly because of interruption either to electricity or water supplies.

This has included promoting successful exploitation of solar power, beginning in the 1990s, and helping to steer a law called the Renewable Energy Act through the German parliament. He has latterly been promoting to a global audience best practice in such matters.