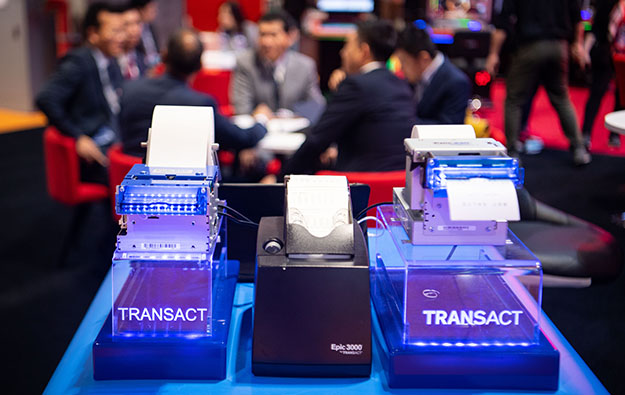 TransAct Technologies Inc, a United States-based supplier of software and printing systems for casinos and other consumer businesses, says its annual net profit rose to nearly US$5.4 million last year from more than US$3.2 million in 2017, a year-on-year increase of 69 percent; on net sales that actually slipped 3.1 percent.

The company announced in its full-year and fourth-quarter results filed to Nasdaq on Wednesday that annual net sales shrank to about US$54.59 million in 2018, down from more than US$56.31 million a year earlier.

In the fourth quarter of last year TransAct made a net profit of US$962,000, having made a net loss of US$412,000 in the same quarter a year earlier. Fourth-quarter net sales shrank to US$11.76 million, from more than US$13.19 million in the corresponding period.

The written announcement quoted TransAct chairman and chief executive Bart Shuldman, as saying: “During the 2018 fourth quarter, global casino and gaming sales grew 21 percent year over year as we further expanded our share of the global casino market.”

Fourth-quarter sales in this business segment grew to almost US$5.32 million from just over US$4.4 million a year earlier. Fourth-quarter casino and gaming sales outside the U.S. expanded by 223 percent.

TransAct said the annual value of sales in its casino and gaming business grew to over US$26.59 million in 2018 from almost US$18.62 million the year before.

Mr Shuldman’s comments in the results announcement detailed the work the company was putting into its food and beverage business, which he said was a “very large sales opportunity”.

“While devoting resources to the development of the Boha (food and beverage) solution suite, we simultaneously leveraged our strong position in the global casino and gaming industry throughout the year to drive further sales growth,” he added.

The emphasis on hospitality reflects the demands placed on the board by activist investor Grand Slam Asset Management LLC. Grand Slam, its manager and a fund managed by the institution control about 7 percent of the company – making it the biggest single public shareholder in TransAct.

Grand Slam wants TransAct to focus on the restaurant business and has lobbied for more restaurant industry managers on the board. TransAct has responded by announcing it would seek to appoint a director with restaurant chain operating experience.

The bulk of TransAct’s sales currently come from customers in the casino industry – slightly more than half of last year’s US$54.59 million in net sales.

The company describes itself as a global leader in software development and printing for industries that include food and beverage, casino and gaming, lotteries, and oil and gas. It says there are more than 3 million of its thermal printers and terminals installed around the world.