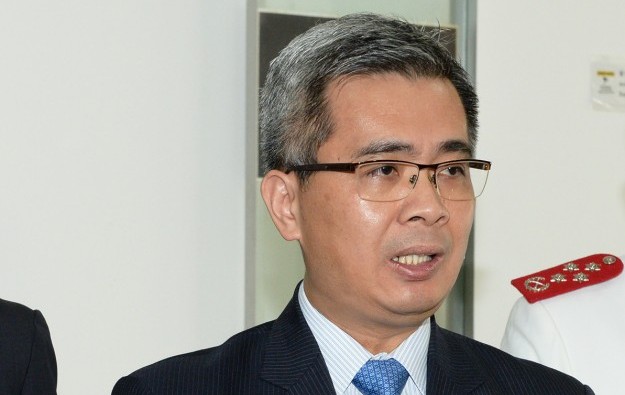 Macau relaxed transit visa restrictions for mainland Chinese passport holders as the number of abuses had fallen in the past 12 months, Secretary for Security Wong Sio Chak (pictured) said on Thursday. Effective from Wednesday, mainland Chinese who transit via Macau are again allowed to stay for up to seven days, provided they have documented proof of onward travel to a third destination.

Since July 1, 2014, the Macau government had tightened transit visa rule implementation, limiting such travellers to a five day stay. It had been claimed that the transit visa system was being manipulated by high roller gamblers and their agents to make multiple trips to Macau under the cover of business trips to onward destinations.

The police had estimated last year that the stricter rules would reduce abuses by half.

Speaking to reporters, Mr Wong said the drop in the number of abuses of the transit visa rules since July 2014 was factored when deciding to adjust and loosen the policy. The Macau government however does not rule out revising the rules again if they find any irregularities in the future, the official added.

Analysts at brokerage Sanford C. Bernstein Ltd estimated in a note on Tuesday that the use of transit visas to Macau by mainland Chinese has declined by 50 percent since July 2014.

Morgan Stanley Asia Ltd said in a note on Wednesday that it shouldn’t be assumed that longer stays for mainland visitors via transit visas would translate into more gaming revenue for Macau. “Since the average length of stay in Macau is 1.4 days, any extension of stay beyond 5 days may not be material,” the analysts wrote.

On Thursday, Mr Wong additionally said the government decided to ease the rules in an effort to align Macau with mainland China’s “One Belt, One Road” initiative. The “One Belt, One Road” initiative refers to the China-led Silk Road Economic Belt and 21st Maritime Silk Road, both concepts proposed by Chinese President Xi Jinping to strengthen China’s relations and cooperation with other countries and regions.

The decision on transit visas aims to support the policy of transforming Macau into a world tourism and leisure centre, added Mr Wong.

Mainland passport holders breaching the new transit visa regime will be granted only two days of stay if they again enter Macau on a transit visa within 30 days. For a second such breach of the rules they would be denied entry into Macau for 30 days.

Also commenting on the transit visa rules, Macau’s Secretary for Economy and Finance, Lionel Leong Vai Tac, said he expects more mainland travellers to choose Macau as a transit gateway to a third destination. He added that the measure would help integrate Macau into mainland China’s development strategy, but said he did not expect an immediate impact on casino revenue.

Shares of Sands China Ltd surged 12.1 percent on Thursday but have still lost half of their previous value over the past year. Shares of Wynn Macau Ltd rose 13.8 percent and MGM China Holdings Ltd leapt 15.9 percent at the close of trading in Hong Kong. Galaxy Entertainment Group Ltd saw its shares jump 13.3 percent, while SJM Holdings Ltd was up 7.3 percent.

“News this week of a relaxation in transit visa policies drove a rally in Macau gaming stocks, and June Macau gaming revenues came in higher than expected. However, updates on the full smoking ban and the intensification of the anti-corruption drive indicate continued headwinds,” said Cameron McKnight and Tiffany Lee of Wells Fargo Securities LLC in a note on Thursday.

Mr Leong also admitted that the decline in gross gaming revenue (GGR) in June was smaller than what he expected. The official had flagged – in comments to the local media – a GGR decline for June as high as 41 percent year-on-year.

The decline was 36.2 percent year-on-year in June to about MOP17.36 billion (US$2.17 billion), according to official data. It was the slowest monthly rate of year-on-year decline since January, when the market contracted by 17.4 percent.

On Thursday, Mr Leong said July is historically a better month for the casino industry than June. But he warned that if casino revenue falls below MOP18.36 billion this month, the government would have to consider spending cuts, as the average GGR for the seven months to July 31 would be about MOP20 billion.

Analysts Kenneth Fong and Isis Wong of Credit Suisse AG said they believe the market “is likely to past the weak June given the transit visa rule is just loosened and that should lead to a better premium mass and VIP business in the months ahead”.

“As such, the revenue trend in July/August would be more important indicators to assess the health and true momentum of the sector,” they said in a note on Friday.

A Philippine lawmaker says public opinion on Philippine Offshore Gaming Operators (POGOs) would be an important factor when he and colleagues draft a Senate committee report on the economic and... END_OF_DOCUMENT_TOKEN_TO_BE_REPLACED