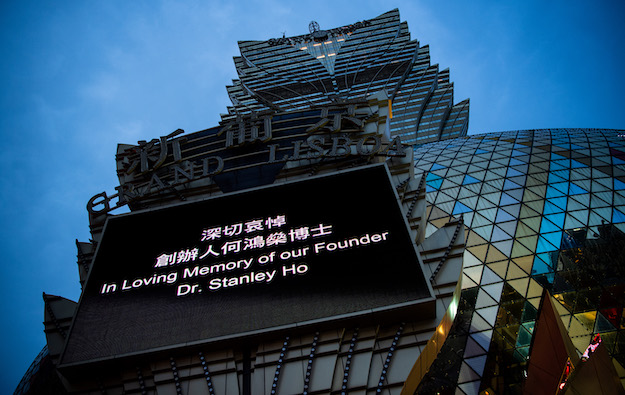 “Even though we knew that this day would come, it doesn’t lessen our unspeakable sadness,” said one of his daughters, Pansy Ho Chiu King.

The co-chairperson and executive director of MGM China Holdings Ltd made the comments to media gathered outside the Hong Kong Sanatorium and Hospital where Mr Stanley Ho had been cared for prior to his death.

Mr Stanley Ho, founder of current Macau operator SJM Holdings Ltd,  had a total of 16 recognised offspring by four consorts. In a joint statement released shortly after his death, the four branches of his family praised him as “a larger-than-life figure whose unparalleled vision, entrepreneurial spirit, resourcefulness and fearlessness were widely-recognised and well-respected.”

In a letter of condolence to the businessman’s family issued on Tuesday, Macau’s Chief Executive, Ho Iat Seng, said the late entrepreneur had made significant contributions to Macau’s stability and prosperity.

Macau-based lawyer Rui Cunha, one of Mr Stanley Ho’s longest-serving advisors, expressed in a statement “profound sorrow” at his death, noting he had been responsible for several infrastructure projects that contributed to the modernisation of Macau.

Mr Cunha worked with the entrepreneur for more than 30 years. In 2017, the lawyer stepped down from the board of SJM Holdings having been a director of the Hong Kong-listed company since its incorporation in 2006.

Manuel Joaquim das Neves, director of Macau’s casino regulator the Gaming Inspection and Coordination Bureau from 1997 until 2015, and who had worked for the bureau since 1985, told GGRAsia that Mr Ho had been “mentally ready” for the end of his 40-year Macau gaming monopoly that officially happened in 2002.

“Mr Ho was prepared for the competition. He was a person able to adapt,” Mr Neves told us.

The businessman had been of “paramount importance to Macau’s recent history, and on this I think everyone would agree,” Mr Neves added. “Much of the development in Macau would not have happened without him.”

Luiz Lam worked in a security role for Mr Ho’s original casino monopoly, Sociedade de Turismo e Diversões de Macao SA (STDM) from 1989 until 1996. Since then he has been in the Macau junket sector. Mr Lam is currently a director at Macau junket trade body the Association of Gaming and Entertainment Promoters.

He told GGRAsia that Mr Ho had been “clever” in making sure the “interests and profits involved” in casino junket operations were “evenly spread amongst the different parties, some of which had a triad background”.

Mr Lam said that as a boss, the late businessman was “humorous and gentlemanly, humble and kind to workers, even if you were an employee of mid or lower tier”.

The casino veteran added: “He was a man with a good memory. At some private dinners, when he saw you he would always remember your name and came over to greet you.”

The leader of the Hong Kong government also reacted to the death of Mr Stanley Ho. Chief Executive Carrie Lam Cheng Yuet-ngor said he had been an influential figure in Hong Kong and Macau, with a wide range of contributions to education and charitable causes.

Vasco Rocha Vieira, the last governor of Portuguese-administered Macau up to the time of the city’s handover to China in 1999, told Portuguese news agency Lusa that Mr Stanley Ho’s presence in Macau had “marked an era” in the development of the city

“I remember an intelligent, versatile man, pleasant to deal with, respectful of his status and his skills,” said Mr Rocha Vieira, as quoted by the news agency. He added that the businessman had not only supported several infrastructure projects before the handover of Macau, but also contributed to several social causes in the city.

The liquidity of casino group Las Vegas Sands Corp is “strong”, with over US$6.4 billion of consolidated cash and nearly US$3.5 billion of undrawn revolving credit facility capacity, said a... END_OF_DOCUMENT_TOKEN_TO_BE_REPLACED