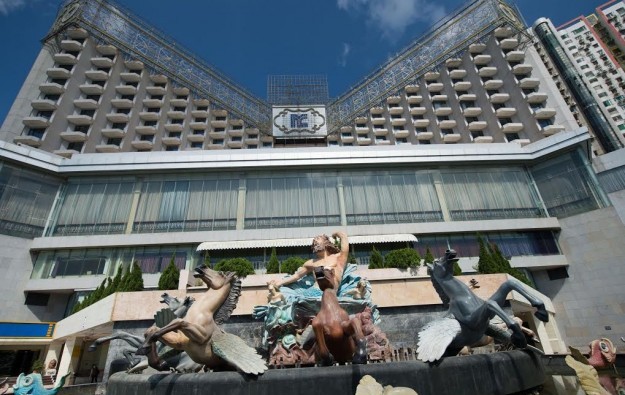 Macao Government Tourism Office (MGTO) has ordered a temporary closure of Beijing Imperial Palace Hotel – where the already-shuttered Casino Greek Mythology is located – for a period of six months starting on Saturday.

The sanction on the hotel (pictured) is the result of “serious administrative irregularities” and “illegal reconstructions”, said Maria Helena de Senna Fernandes, MGTO’s director, speaking at a press briefing held on Friday.

Ms Senna Fernandes said it was the first time that a hotel registered with the local authorities as a five-star establishment had been subject to such a closure sanction.

GGRAsia on Friday approached the gaming bureau for further updates on Casino Greek Mythology and whether it might reopen. We had not received a reply by the time this story went online.

The latter, described in the 2016 annual report of Amax International as an associate and the operator of the Greek Mythology casino, has refused to provide “valid financial information” to Amax International since 2012, resulting in a “lengthy legal dispute” according to the filing.

Following Friday’s announcement by the government regarding the closure of Beijing Imperial Palace Hotel, Amax suspended the trading of its shares on the Hong Kong bourse with effect from 1pm that day.

Prior to the ordered closure of the hotel, its restaurants and several other facilities had either had their licences suspended or been permanently closed down, Ms Senna Fernandes said.

She also gave some detail during the press briefing regarding the alleged administrative malpractices at the hotel, including violation of fire safety rules.

“Closing a hotel is not an easy or hasty decision…” Ms Senna Fernandes told reporters. “The closure has certainly affected the tourism image of Macau somehow, but a more important consideration for this decision is that we have to think of the public interest at large,” she added.

The hotel had failed a multi-department government inspection conducted there on July 12 , Ms Senna Fernandes said.

“The operator of the hotel asked for an extended period to improve the facilities after our check on July 12. But then afterwards we still did not see any actual improvements implemented at the site,” the MGTO head said, explaining the decision to close the hotel.

MGTO told the media the hotel had since 2014 been fined a total of MOP55,750 (US$6,979) for operational malpractices and failures to comply with fire safety requirements.

The operating licence of Beijing Imperial Palace was last renewed on January 1 with some supplementary conditions, including particular safety requirements relating to the hotel lifts. The hotel had failed to meet the June 30 deadline for implementing those measures, Ms Senna Fernandes noted.

The MGTO head stressed that the decision to close the hotel was not related to legal disputes regarding the ownership of the hotel property, but because the authorities had not seen any fundamental improvements in the operation of the hotel.

“The hotel may face a permanent closure if it still cannot fulfil the licensing conditions in the ensuing six months [following the temporary closure],” Ms Senna Fernandes told reporters.

As of Friday, nine tour groups from mainland China had bookings for a total of 573 rooms in the hotel, according to MGTO. The hotel has a total of 599 rooms. Tourism agencies and online booking agents that have booked rooms from Beijing Imperial Palace on behalf of clients had already been informed of the closure and were making necessary arrangements for customers, she said.

Also present at the Friday briefing was the acting director of the Labour Affairs Bureau, Ng Wai Han. She noted that a total of MOP20.74 million was involved in regard to complaints filed by 345 Beijing Imperial Palace employees relating to wages owed; and other disputes on remuneration.

In an interview with TDM’s Chinese-language radio service, Wong Fai, vice president of the Travel Industry Council of Macau, said that at least 20 local tour agencies were affected by the temporary closure of Beijing Imperial Palace Hotel.

He said those agencies had made advance bookings at the hotel for the coming two years. The association representative noted that the agencies had been unable to reach the owner of the hotel.

Singapore has the potential to be a “top choice” for Chinese outbound travellers, once the country reopens and eases travel restrictions associated with the Covid-19 pandemic, suggested... END_OF_DOCUMENT_TOKEN_TO_BE_REPLACED