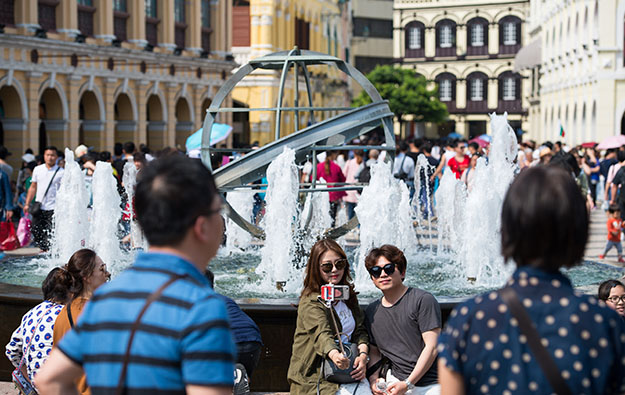 August visitor arrival numbers to Macau fell slightly, due to “the catastrophic typhoon on 23 August”, the city’s Statistics and Census Service announced on Friday.

Tourist arrivals for August totalled 2,866,400, down by 0.6 percent year-on-year. The tally of same-day visitors went down by 6.2 percent, but that for overnight visitors increased by 4.8 percent.

The city’s tourism authority – the Macao Government Tourism Office (MGTO) – had separately reported this week, quoting Macau Hotel Association data, that aggregate hotel occupancy for the month had fallen by 3.9 percentage points year-on-year, to 88 percent. Two Macau casino hotels – providing between them about 540 rooms, or 1.5 percent of the city’s 36,500-room capacity as measured at the end of December – had remained closed well into September following the adverse weather.

The arrival of Typhoon Hato, with wind speeds of up to 200 kilometres per hour (124 mph), led to 10 deaths in the city and widespread damage to infrastructure that disrupted the city’s tourism industry for eight days afterwards.

MGTO had asked its tour agent partners to suspend – between August 25 and September 1 inclusive – group tours to Macau, to allow the city time to recover from the effects of Typhoon Hato. Two days after the storm MGTO had also urged visitors to reconsider any upcoming trips to the city.

Friday’s statistics bureau data showed the total number of August visitors from mainland China nonetheless increased by 1.9 percent year-on-year to nearly 2.02 million, although the tally of those mainlanders travelling under the Individual Visit Scheme dropped 0.4 percent to just over 1 million.

The aggregate of visitors from Hong Kong and Taiwan dropped by 10.5 percent year-on-year and 1.9 percent respectively while arrivals from South Korea grew by 30.8 percent.

The respective tallies of tourists from the United States, Canada, Australia and the United Kingdom registered year-on-year decreases.