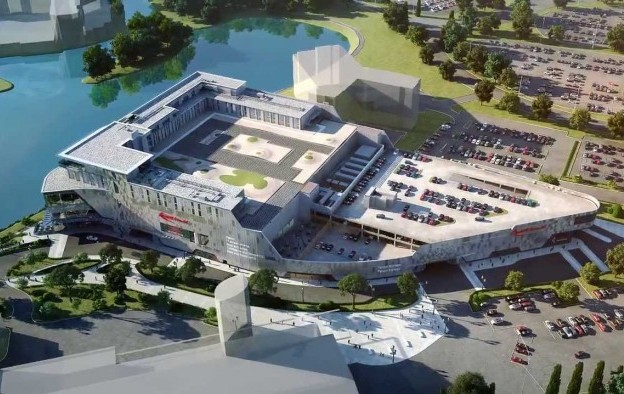 A casino resort in Birmingham – the U.K.’s second-ranked city by population and nicknamed locally as ‘Brum’ – is likely to be a good source of earnings from mass-market gaming for Genting Malaysia Bhd, says a research note from Japanese brokerage Nomura.

“Resorts World Birmingham [pictured in a rendering], which is scheduled to open in the second half of 2015, should lead to future earnings uplift from Genting Malaysia’s U.K. operations,” said Nomura analysts Tushar Mohata and Alpa Aggarwal in the note issued on Friday.

It followed meetings between Genting Malaysia management and investors hosted by the brokerage during its Nomura Investment Forum Asia 2015.

Nomura added, referring to Genting’s countrywide U.K. operations: “Volume in the four international market casinos, which cater to VIPs, might see some slowdown, in line with the global decline in Chinese VIP roll.”

According to a corporate website, Genting U.K. has five casinos in London, including its flagship Crockfords, a private members club in upmarket Mayfair.

But provincial Birmingham – along with Durban in South Africa – is said by casino industry professionals to be one of the world’s biggest single-conurbation markets for roulette.

According to Birmingham City Council, citing the U.K.’s 2011 national census, around a quarter of Birmingham’s 1.07 million recorded population identified themselves as Asian or British Asian, including people with family roots on the Indian sub-continent and China.

Genting U.K. has operated a casino in the city since 2003. Its new GBP150-million (US$229.2-million) property Resorts World Birmingham covers 12 storeys and includes a 50-outlet shopping mall and an 11-screen cinema.

“The resort location is in close proximity to the airport and train station and is planned to have a casino of up to 30 gaming tables, 150 slot machines, sports betting and bingo along with non-gaming amenities including a hotel and spa with 180 four-star rooms and five VIP-star suites,” said Nomura’s note.

Genting U.K. operates more than 40 casino outlets in the U.K., ranging from Edinburgh in Scotland to Plymouth on the southwest coast of England.

In commentary on Genting Malaysia’s other operations, Nomura said the casino operator’s core gaming business – the Resorts World Genting casino resort at Genting Highlands in Malaysia – had not been as heavily exposed to the mainland China VIP gaming business as Macau and some other destinations.

“In first quarter 2015, VIP roll was up in low single digits year-on-year, highlighting the resilience of the ASEAN [southeast Asian] VIP business, which Resorts World Genting is mainly focused on. Additionally, 60 percent of the casino revenues are derived from the mass market, which is still holding up,” stated the Nomura team.

The institution added that at Resorts World New York City, in the U.S., “a reduction in headcount,” that raised severance costs in the fourth quarter had helped in the first quarter to boost earnings before interest, taxation, depreciation and amortisation by 45 percent year-on-year to MYR96.0 million (US$25.5 million).

Nomura stated that Genting Malaysia was looking to cut further the losses at its majority-owned Resorts World Bimini in the Bahamas.

“The 300-room Hilton hotel, to open in the second half 2015, should further improve the product and visitation to the resort. Management’s longer term goal is to capture a higher share of the VIP market due to the high profitability (only an approximately 5 percent gaming tax rate),” stated the Nomura analysts.

The imminent return of package tours from mainland China will not only help boost Macau’s tourism businesses, but is also expected to help casinos gain more foot traffic in their mass gaming... END_OF_DOCUMENT_TOKEN_TO_BE_REPLACED