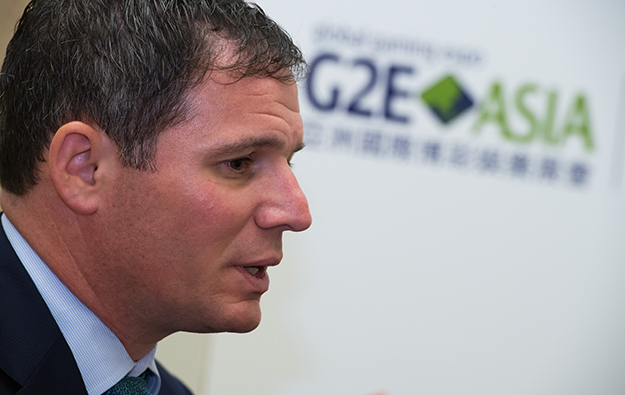 The U.S. casino operators with a footprint in Macau have made “immense contributions” to the development of the city’s casino industry, and that should be recognised during the upcoming concession renewal process, says Geoff Freeman, president and chief executive of the American Gaming Association (AGA).

“I am confidant that the Macau government and the [Chinese] central government will recognise the immense contributions these companies have made, and look forward to partner with them for future success,” Mr Freeman (pictured) told GGRAsia in a Tuesday interview in Macau. He was talking on the sidelines of the Global Gaming Expo (G2E) Asia 2017 conference and trade show.

He added: “When you look at the immense contributions that MGM [China Holdings Ltd], Sands China Ltd and Wynn [Macau Ltd] have made to this destination, [they have] raised the bar in a variety of ways… The type of investments in this market, the number of jobs that these companies are providing, the high regulatory standards that they are meeting, I think that by all accounts they have been tremendous partners in this market.”

The Macau government stated several times in the past that between the years 2015 and 2016 it intended to start examining the possible refreshment of Macau’s gaming concessions. However, there has been no public announcement on the start of the process.

Instead, the Macau government completed in 2016 a “mid-term” review of the local casino industry. The findings of that review were mostly quantitative and shed no light on the possible refreshment of gaming concessions. Macau’s six casino concessions expire between 2020 and 2022.

AGA is a U.S.-based casino industry trade body and lobbying group. It is one of the co-organisers of G2E Asia. The other is Reed Exhibitions. This year’s edition of the three-day conference and trade exhibition for the casino gaming industry runs until Thursday, at the Venetian Macao casino resort.

Prior to travelling to Macau to attend G2E Asia 2017, Mr Freeman visited Japan, where he met with government representatives and legislators. Legislation making casino gambling legal in that country came officially into effect on December 26.

Casino legalisation in Japan is a two-statute process. After approval of the enabling bill legalising casino resorts at the conceptual level, a second piece of legislation – known as implementation bill – has now to be passed, detailing the specifics, including how casinos are administered and regulated.

Mr Freeman said U.S.-based casino operators could “have a lot to add” to Japan’s nascent casino industry. “They have contributed very favourably in Macau and they will contribute favourably in other markets in which they do business,” he said.

The AGA executive refuted criticism that the casino legalisation process in Japan was moving slowly. “The process is going exactly as you would expect it to go,” Mr Freeman told GGRAsia.

He added: “All new markets are thoughtful and diligent when considering the best way to add casino gaming and I think Japan is very pensive right now and that is exactly what we would expect… That process is going to help build a strong regulatory system in what could eventually become one of the world’s greatest gaming markets.”

Global Market Advisors LLC (GMA) – a U.S.-based consultant to the casino gaming, hotel and airline industries – estimated in a recent white paper that the Japanese parliament, also known as the Diet, could approve the implementation bill by the end of this year.

The consultancy firm estimated Japan’s process for deciding on the location of resorts would be completed by the third quarter of 2018. This would be followed by the request for proposal stage, with the winners chosen by the third quarter of 2019, it said. GMA estimated that – based on current circumstances – 2023 would be the earliest that a Japanese gaming resort could open.

Regarding the U.S. market, Mr Freeman said the new Trump administration could help unlock several important issues for the country’s casino industry. “There has already been progress, particularly from a regulatory standpoint, and we are excited about that,” he said.

He added: “Sports betting is a great opportunity in the United States, a multi-billion opportunity to open up a market. And we are optimistic that we will be able to get that done during this first term of the Trump administration.”

The American Gaming Association has been a strong advocate for legal, regulated sports betting in the United States. According to the results of a January survey commissioned by the group, approximately 55 percent of Americans are in favor of ending a federal sports betting ban to allow U.S. states to decide whether to offer sports betting.

A Macau court was offered evidence on Monday, including of recordings from police-wiretapped telephone conversation, that the prosecution says proves the direct involvement of Levo Chan Weng Lin... END_OF_DOCUMENT_TOKEN_TO_BE_REPLACED