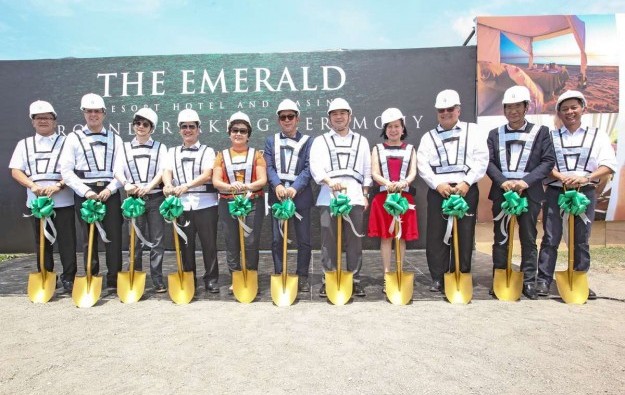 Philippine-based Udenna Development Corp broke ground a fortnight ago on a casino resort in Lapu-Lapu City, on the island of Mactan in Cebu province. The announcement was made in a Tuesday press release issued by the country’s gaming regulator, the Philippine Amusement and Gaming Corp (Pagcor).

Pagcor announced in May that it had approved a provisional licence for Udenna to build the casino resort. Privately-held Udenna – owned by Philippine businessman Dennis Uy (pictured fifth from right) – is a company based in Davao City. According to media reports, Mr Uy was a top contributor to the election campaign of the country’s current head of state, President Rodrigo Duterte.

“We hope that in two or three years’ time, we will be here again to witness the opening of this project,” said the head of Pagcor, Andrea Domingo (pictured fourth from right), in a statement included in the release.

“We hope that this will be a precedent for all integrated resorts that will be built outside of Entertainment City in Manila … because in Cebu City, there will be a world-class resort casino that is worth taking a look,” she added.

Also quoted in the release, Udenna’s Mr Uy said “the project will play a vital role in transforming Mactan into a premiere tourist destination”.

He added: “We break ground for thousands of jobs that will provide countless opportunities and brighter future for local businesses and entrepreneurs. It is also about showing the best of what Filipino talent and hospitality has to offer.”

According to Tuesday’s release, Udenna will invest about US$341 million in the scheme, dubbed The Emerald Resort and Casino. The project – which broke ground on July 26 – is to be built on a 12.5-hectare (30.9-acre) beachfront property, six kilometres (3.7 miles) from Cebu’s international airport.

The casino, retail complex and hotels are scheduled to open as early as 2019, with the remaining facilities to be completed by 2022, the firm had said previously.

The property – stated the release – was designed by U.S. architect Paul Steelman, whose practice Steelman Partners has been involved in many gaming projects in the U.S. and in Asia.

Mr Steelman, quoted in Pagcor’s release, said that despite featuring gaming areas, the overall property was designed “to be family-friendly”. “The palatial aspect of this building will certainly attract more tourists,” he added.

The Emerald is the first casino resort approved by the new board of Pagcor, noted Ms Domingo.

Ms Domingo had said in March that the country would impose a five-year moratorium on issuing further casino licences for the capital Manila, amid industry concerns of oversupply. Despite the moratorium on more Manila licences, Pagcor was said to be welcoming casino development applications for other parts of the country with more modest capital expenditure.