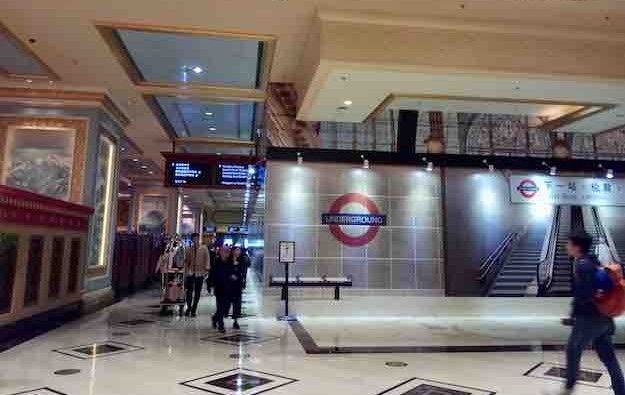 The British branding of the Londoner Macao casino resort (pictured), which has a first-phase opening today (Monday, February 8), will be easily and instantly understood by visitors from mainland China, says Glenn McCartney, the United Kingdom’s honorary consul in Macau, and associate professor of Integrated Resort and Tourism Management at the University of Macau.

“It’s absolutely important that the Chinese traveller understands” a resort brand or other tourism brand, the academic told GGRAsia. In that regard, the Londoner Macao is “very clear”, he stated.

“You can invent your own branding” for a tourism resort, but “that takes some time to ramp up,” he added.

“The Londoner [Macao] straight away has iconic things, like the buses, or the phone boxes, or the many other things in the property,” noted Mr McCartney.

The resort is a revamped and rebranded version of an existing Cotai resort, Sands Cotai Central.

The upgraded venue has been given a British theme, including a façade replicating the Palace of Westminster, the home of the U.K.’s parliament.

The cost of the conversion – aside from the spend on Londoner Court, a luxury-suite facility on the site costing US$400 million – is US$1.35 billion, according to a recent earnings presentation of Las Vegas Sands Corp, the United States-based parent of the Londoner Macao’s promoter, Macau casino operator Sands China Ltd.

Sands China already has two other themed resorts on Cotai: the Venetian Macao, and the Parisian Macao.

Penny Wan Yim King, visiting assistant professor at Macao Institute for Tourism Studies (IFTM), with research interests including integrated resort management, told GGRAsia that her past research indicated mainland China visitors to Macau seek out the “new” and the “exotic”.

The Londoner Macao, with “strong connections” to “British style” in terms of “lodging and culture,” will be the sort of “uniqueness,” likely to appeal to mainland tourists, said Ms Wan.

She added, referring to a former footballer for the England national team, who has also acted as a brand ambassador for the Las Vegas Sands group: “Football fans will more likely be attracted by David Beckham.”

The homepage of the Londoner Macao website shows Mr Beckham posing next to a typical red-coloured British “pillar box” or post box.

Londoner Macao offerings to be introduced in phases throughout this year include some accommodation within the Londoner Hotel – one of the hotel towers at the property – and which are branded as Suites by David Beckham.

“The unique design of London’s public spaces, architecture and landmarks will be other attraction points,” in terms of the way the Londoner Macao has been presented and branded, suggested Ms Wan. “Fresh and a new experience is even more crucial for repeat visitors to Macao,” she added.

But the IFTM scholar also noted that many Chinese people were not “risk takers” as consumers.

She noted: “They rely a lot on their friends and relatives, and social media, to provide them with the necessary information.”

Ms Wan added that “positive-word-of-mouth” from such trusted sources, would “definitely help in attracting more mainland Chinese customers to visit the Londoner Macao”.

“Thus, I believe that the Londoner [Macao management] needs to manage well their information dissemination, addressing comments and feedback in a timely way,” and to ensure the highest-possible service quality, “especially in the first few years of opening,” in order to “generate positive-word-of-mouth”.

British honorary consul Mr McCartney noted that, while Macau was known for getting repeat visitors, what the city needed now was consumers new to the market. That might mean “family” groups, he told GGRAsia.

“I think for the mainland Chinese, who are rather restricted in terms of their outbound [travel] options right now,” this could be a good time for Macau to connect marketing-wise with such consumers, and the Londoner Macao could be one way for the city to do that.

Currently mainland China is the only place to have a largely quarantine-free travel bubble with Macau, amid existing travel restrictions as countermeasures against Covid-19.