Universal drops claims vs ex-staff to focus on Manila 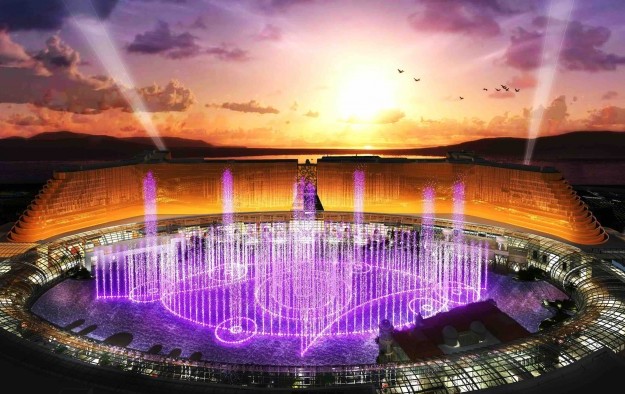 Universal Entertainment Corp, controlled by Japanese gaming entrepreneur Kazuo Okada, on Thursday announced it was dropping demands for damages against a group of former employees. The group in question had accused the firm of paying bribes worth up to US$40 million to ensure Universal Entertainment received a provisional casino licence in the Philippines.

Universal Entertainment said it wanted to focus instead on completing its casino project in the Philippine capital, Manila – a project that came about thanks to that previously disputed provisional casino licence.

The firm’s affiliate Tiger Resort, Leisure and Entertainment Inc is building the US$2-billion Manila Bay Resorts (pictured in an artist’s rendering). The firm was earlier this week formally granted an extension on the completion timetable, according to media reports. Tiger Resort is now required to have the project ready by the end of next year.

Universal Entertainment said in Thursday’s press release that on September 11 it had filed a request to the Tokyo District Court to abandon its damages claims against the group of former employees.

“A financial institution has recently requested us to end the litigations… in order to raise funds [for the Manila Bay Resorts project] smoothly,” Universal Entertainment stated in the press release.

“After considering the request from the financial institution, the company has determined that it is helpful to concentrate its business resources in order to open the casino resort promptly and concluded to abandon the claims,” the firm added.

Universal Entertainment did not identify the financial institution involved in the request to drop the legal action against the former employees. Last month, the Japanese firm raised US$600 million for the Manila project in a debt sale handled by Deutsche Bank AG.

The report from Reuters stated that one of the former employees was still pursuing a counterclaim lawsuit filed in 2013 against Universal Entertainment, Mr Okada and a company lawyer called Yuki Arai, alleging defamation.