May 11, 2015 Newsdesk Japan, Latest News, Philippines, Top of the deck 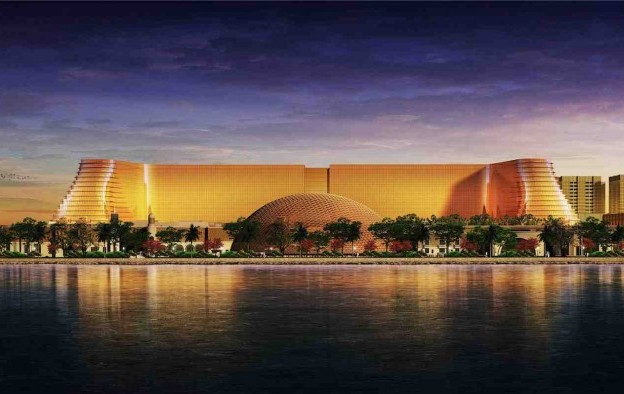 Universal Entertainment Corp has declared a dividend of JPY15.00 (US$0.125) per share for the fiscal year ending March 31, it said in a filing to Jasdaq on Friday.

The firm was founded by pachinko machine entrepreneur Kazuo Okada. He is currently developing a US2.3-billion casino property called Manila Bay Resorts (pictured in a rendering) in the Philippines capital Manila.

The total amount of ordinary dividend payable by Universal Entertainment for fiscal 2015 is JPY1.1 billion based on approximately 73.38 million outstanding shares, exclusive of 6.8 million treasury shares, the company added. The effective date for the payment to investors is June 29.

For fiscal year ending March 31, 2014, the firm declared a dividend totalling approximately JPY1.83 billion, or JPY25.00 per share. But this fiscal year, the firm – on March 5 – also declared an extraordinary dividend of JPY30.00 per share, bringing the total dividend per share for fiscal 2015 to JPY45.00.

Universal Entertainment said the latest dividend announcement was “in order to return profit to the shareholders, as its core…pachislot and pachinko business has been progressing favourably”.

The same day the firm said it was proposing five new candidates for the board – three of whom are described as being “outsiders”.

The management of Universal Entertainment has been under scrutiny in the past few years.

In May last year, Universal Entertainment filed criminal charges with the Tokyo District Public Prosecutors Office against a former company employee related to what the firm said was the unauthorised “outgo of US$30 million in total in 2010”.

In June 2014, it was reported that a former employee of Universal Entertainment had himself in May that year filed a criminal complaint against Mr Okada. In that complaint, Takafumi Nakano alleged Mr Okada ordered the payment of bribes to advance Manila Bay Resorts.

Allegations relating to the Manila project led to official investigations in the Philippines, in Japan and in the United States, where Mr Okada’s privately held Aruze Gaming America Inc conducts business as a gaming equipment supplier.

In March, Universal said investigations in the Philippines and in Japan had “concluded”. But later the same month Philippine media reported the country’s Justice Secretary saying her department’s officials had not yet issued any resolution regarding a bribery probe.

Also in March, media in the Philippines reported that Tiger Resort, Leisure and Entertainment Inc – the developer of the Manila casino and a firm controlled by Mr Okada – would be allowed to “complete” the resort by the first quarter of 2017.

Most of Macau’s casino operators are likely to generate positive free cash flow in the first quarter, given the robust recovery level of mass-market gross gaming revenue (GGR) in January, relative... END_OF_DOCUMENT_TOKEN_TO_BE_REPLACED