Universal Entertainment to pay US$0.25 dividend 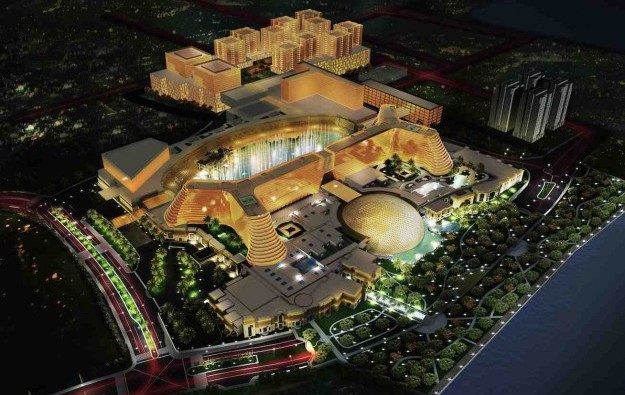 Japan-based pachinko machine maker Universal Entertainment Corp, an investor in the Manila Bay Resorts casino resort (pictured in a rendering) in the Philippines, is to disburse JPY2.2 billion (US$18.6 million) in dividends, the company said.

The company decided to pay a dividend of JPY30 apiece to shareholders on register as of March 5, 2015, “which it has established as an extraordinary record date for this fiscal year only”, it said in a filing on Friday.

The decision to pay the dividend took into consideration the “brisk” performance of the company’s pachislot and pachinko business, Universal Entertainment, controlled by billionaire Kazuo Okada, said.

On Friday, Universal Entertainment said its consolidated net income rose more than 42 percent year-on-year in the first nine months of the firm’s fiscal year, which is due to end on March 31, 2015.

Consolidated net income jumped to about JPY1.8 billion, from JPY1.3 billion in the year-prior period, the firm said.

Consolidated net sales for the period rose 17.3 percent to just over JPY47 billion. Net sales in the pachislot and pachinko segment increased by 17 percent year-on-year to JPY44.9 billion in the first nine months of the company’s fiscal year, coinciding with the launch of five new pachislot titles.

The under-construction US$2.3-billion Manila Bay Resorts casino project in the Philippines added three floors to the height of the complex in the three months to December 31, Universal Entertainment said.

“Construction is well underway at Manila Bay Resorts,” the firm said, adding that framework construction has reached the 12th floor.

The company is yet to announce a completion date for the scheme. In September, Manila Bay Resorts’ developer Tiger Resort, Leisure and Entertainment Inc, a firm led by Mr Okada, said the property was on schedule for a first phase opening in late 2015.

Macau’s casino gross gaming revenue (GGR) for the first five days of February is estimated at MOP1.9 billion (US$235.1 million) – or MOP380 million per day – a level that suggests a “45... END_OF_DOCUMENT_TOKEN_TO_BE_REPLACED