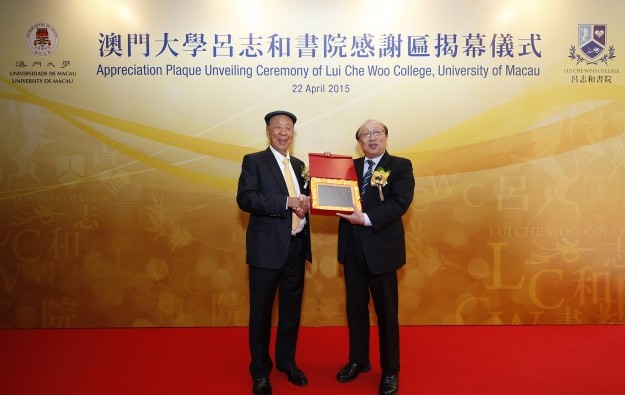 The naming of Lui Che Woo College was in recognition of a MOP30-million (US$3.76-million) donation in 2010 by an entity called LCW Management Ltd to the University of Macau Development Foundation, said a press release from Galaxy Entertainment issued on Wednesday. The statement didn’t indicate what relationship the Galaxy Entertainment chairman has to LCW Management.

The press release quoted Mr Lui as saying he was extremely grateful to have the opportunity to make contributions to higher education in Macau.

“As Macau is striving for economic diversification, demand for all types of professionals will gradually increase,” Mr Lui said according to the statement.

He added: “In view of this, the [Macau] SAR government has established a long-term mechanism for cultivating talent and has proposed relevant policies, including the set-up of the Talent Development Committee as well as the formulation and implementation of long-term strategies. I will make my best efforts to promote talent cultivation in Macau.”

The LCW Management donation to the university came long before the central and local governments’ recent focus on talent development and market diversification. But all Macau’s gaming operators are currently happy to present themselves as good corporate citizens and in step with Macau government policies; including the promotion of local talent and the expansion of the economy beyond gaming.

In March, Macau’s Secretary for Economy and Finance, Lionel Leong Vai Tac, said the government would analyse each operator’s social responsibility programme and how each licensee develops the skills and career opportunities of resident workers, ahead of what the administration describes as a mid-term review of the city’s gaming industry expected some time this year.

But public gestures of goodwill by overseas investors in foreign markets are not without risk. In May 2011, Wynn Macau Ltd – the local casino unit of U.S.-based Wynn Resorts Ltd – pledged to donate the equivalent of US$135 million to the university’s development foundation at a time when the firm was awaiting the outcome of a Macau government decision on its request for land for a new resort on Cotai.

The U.S. Securities and Exchange Commission’s regional office in Salt Lake City, Utah, began an investigation in February 2012. But in July that year the securities regulator said it had concluded its inquiry, adding it was not intending to recommended any enforcement action against Wynn Resorts.

Most of Macau’s casino operators are likely to generate positive free cash flow in the first quarter, given the robust recovery level of mass-market gross gaming revenue (GGR) in January, relative... END_OF_DOCUMENT_TOKEN_TO_BE_REPLACED